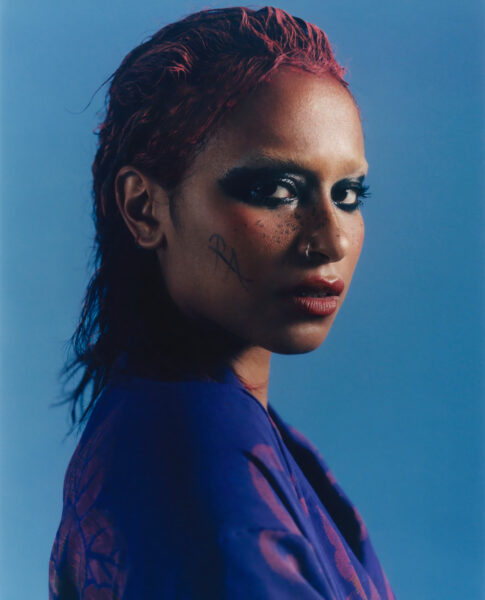 It’s still early, but I’m pretty sure East-London avant-pop songstress Nuha Ruby Ra is the coolest motherfucker on the planet. At the very least, her live experience reads as a laundry list of bands many can only dream of supporting; Fat White Family, Surfbort, Amyl and the Sniffers, Bambara, Japanese Television and a twelve-date tour with Snapped Ankles. It’s enough to make any scuzz dweller weak at the knees, but over the past year Nuha Ruby Ra has emerged in a fashion that suggests she’s on the brink of joining that ‘who’s who’ list in starring role.

A steady fixture in London’s premier independent venues for a while now, Nuha birthed herself digitally in the early days of 2020 with ‘Cure For Tired Business Men (Pt. 1)’. A thirty-two second instrumental concept piece straight out of the Metal Machine Music playbook, it was a bold first foray which served to fan the flames of intrigue and underscore her ambition as uncompromising artist over industry game-player.

First single proper ‘Erase Me’ finds her in the midst of moody, dissonant-heartbreak confessional, as self-help video guitar strumming overlays a jungle of textural horror that plunges us as listeners into the murky depths of darkness even as the singer floats above, a flash of light in the refrain ‘Erase me / Don’t Erase me’ which captivates from above as we sink. Also accompanying is the mesmerising Billie Turnbull-directed video – a red light tonal nightmare which only adds to the feeling of disassociation.

Follow up ‘Cruel‘, to date her most complete track, is a hypnotic, almost-psychedelic delve into the uncanny valley that ethereality can create, as haunted-asylum vocals are scored against a backdrop of Grauzone-type strident saxophone stabbing and constant bassline wandering which climaxes into something more like a murderous Sun Ra than anything you’d expect from the winner of the Green Man Rising competition. Additionally worth watching is the self-directed tasteful light erotica of the video, which somehow unlocks a certain sensuality to the song which may not have been immediately prominent otherwise.

Recent single ‘Sparky’, by contrast, eschews the haunting brilliance of the previous in favour of the direct and up front. A no-frills spoken-word treatise on the wonders of sex and emotional detachment, it explores the intricacies of female-perspective sexual dominance dynamics with an honesty that feels joyous as much as delightfully sordid. As trembling synths open and rotary drumming suffuse below a sleaze of horns, it is sonically positioned between the assless chaps of Depeche Mode and the off-kilter cowboy hat of Warmduscher – and what a delicious proverbial sandwich of sounds and aesthetics.

With her fantastic debut ‘How to Move’ EP due for release in March through Brace Yourself Records, it’s clear that the oyster of brilliance now ripe for Nuha Ruby Ra’s taking is only just on the cusp of shucking open. Her tentative status as ‘coolest motherfucker on the planet’ notwithstanding, grasp onto this artist – all the signs suggest that they may prove to be more important than any of us could hope to say.