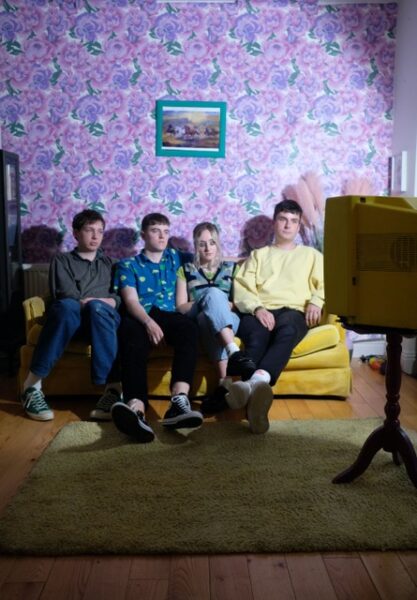 Galway quartet NewDad are the latest in the trend of Irish bands turning away from the post-punk resurgence being enjoyed by their countrymen, in favour of a shimmering hue of sweetness and introspection.

2020’s debut ‘How’ (followed swiftly by ‘Swimming’ and ‘Cry’) proffered early indicators of the group’s left field pop sensibilities, leaning towards a shoegaze-lite sound positioned somewhere between Bloom-era Beach House and the sprawling neurosis of Sorry’s ‘925′. It is the sonic equivalent of watching gold melt, both soothing yet volatile, gorgeous yet painful.

Breakthrough single ‘Blue’, which holds the venerable title of the third most played track on 6Music in 2020, has vocalist Julie Dawson smouldering in a haze of Warpaint-esque sunshine, with the tendrils of heartbreak snaking its way throughout like the veins of a precious metal encased in rock. It is naïve in a way that precludes feeling jaded, yet in no way underdeveloped – just refreshingly honest, and without pretence.

Recent single ‘I Don’t Recognise You’, the melancholically beautiful ode to watching a loved one lose their way, is reminiscent of the slacker-indie from acts like Cherry Glazerr and found the band in a studio together for the first time, with everything previously being self-recorded. Liquid guitar lines and lo-fi drumming melt together with laid-back bassline to create a sliver of nostalgic poignance, a wave of bittersweet, distilled – it is certainly one of the best tracks of the year.

Simultaneously understated yet captivating, NewDad are without doubt one of the gems unearthed during this new wave of lockdown-revealed guitar bands. As one of only three bands (alongside IDLES and The Flaming Lips) invited to record a live session with Steve Lamacq this year, with clear leaps being made in vision and musicality between individual singles, and an EP due for release in early ’21, it is acts like NewDad that will vanguard the next wave of Indie bands –the genre is in good hands indeed.