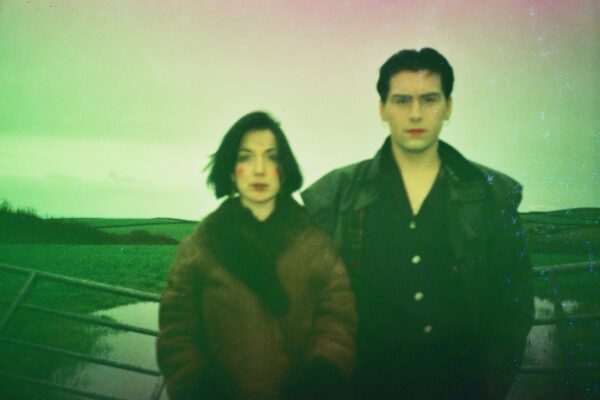 Bristolian couple-duo Robbie & Mona (Pet Shimmers own William Carkeet and Eleanor Gray) have emerged from the woodwork of the bizarre existence we live, and with recent Spinny Nights-released album EW, we have been graced, already, with undoubtedly one of the albums of the year. Taking inspiration more from film than music – Blue Velvet and Dolce Vita are both cited as references ahead of any musical act – there is a certain understated cinematographic quality to their music which allows it to sit directly in the middle of your head, influencing the manner you relate to the world rather than arresting all cognisance.

That’s not to say that, Jesus-fucking-Christ, the record isn’t soul mangling. It is a mind-melter of epic proportions, that I would imagine encompasses the entire range of Charlie XCX’s internet history. But to understand such a record, we must first examine 2020’s debut single ‘Fidelity’, an understated lo-fi invitation into their world which mixes 80’s Japanese supermarket music with a coercively pounding bassline and Beach House vocals, rushing into a euphoric crescendo of anaemia-triumphantalism.

Follow-up ‘Wallpaper’ Finds the pair on perfectly translucent form, as on the former we are presented to a lofty, casio-synth ballad of rhythmic gossamer, showcasing Gray’s ethereality within a web of Carkeet’s casually gorgeous audio weaving. Also worth a mention is the accompanying B-side ‘Mauve Rush’, which despite not appearing on the album, is a brilliant slice of summertime-evening haze, laid back synthesiser tone and reassuringly boxy drums.

Standout track ‘Queen Celine’ clocks in at just under 90 seconds, and veers from catastrophically heavy synth-work into hazy bedroom pop and back again. Drawing together a patchwork of sounds and sonic texture that is the audio equivalent of what wearing high-fashion clothing feels like wearing; simultaneously the height of opulent comfort, yet also dagger sharp in presentation and mood. Also important, especially for a band so openly influenced by the visual side, is the Max McLachlan directed music video, which affects a certain terrifying playfulness that accompanies the track perfectly.

The band have this incredible ability to instantly shift from shimmering, dreamy pop landscapes into sudden jolts of hyper electronica which smacks of a Glass Swords-era Rustie. In a musical landscape which does have a tendency towards a pervading glitch-pop default, Robbie & Mona feel sophisticated and refined by comparison, made somehow more adventurous and coherent by their knowledge of when to chill things out rather than add an extra jolt of digital maximalism. As I mentioned above, ‘EW’ really is a work to behold – and despite their commitments to Pet Shimmers, I really hope this isn’t the last we’ll be seeing of this pairing.

‘EW’ is out now via Spinny Nights. Listen here.