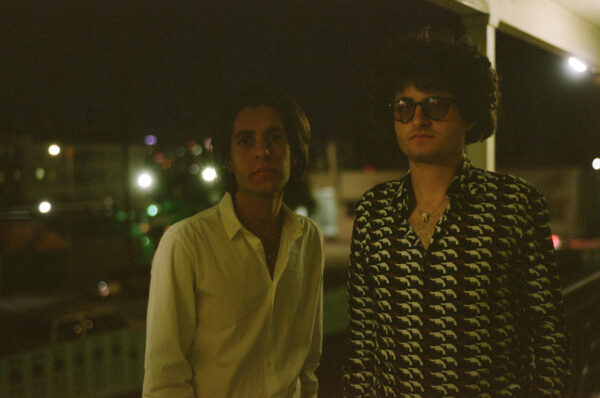 Brothers, Sons of Raphael are princely enigmas of the sublime and ridiculous. Their story reads like one of a ‘70’s glam rocker, their music somewhere between the sonic absurdity of The Flaming Lips and the theatrical gravitas of a ‘Tender Prey’–era Nick Cave. There is no dealing in half measures with these guys – their full-throated rapture, littered with references to the biblical scope of all human experience, is limitless in its’ ambition.

2018’s ‘A Nation of Bloodsuckers’ EP is one of the most hauntingly brilliant debuts of the last decade. Mixing upfront, reverb-drenched scuzzy rock ‘n’ roll on tracks like ‘Jesus’ with the ghostly genius of the title track provides early evidence of the dichotomy at the heart of the band’s essence – the heavenly and the earthly, meshed together in a sensory renaissance of beauty and lust.

2019’s standout track ‘He Who Makes The Morning Darkness’ begins all cocaine-horns, before ascending to an airy, almost psychedelic spiral of massive percussion and chorus reading; “Bloody sunrise / In between her thighs / Extra-national affairs / ‘War,’ a jealous God declares, has begun / Darkness shall lament the sun / Rise topsy-turvydom!”. It’s all very expansive, not least logistically, where a bet of their entire recording budget on a fortuitous basketball game meant they were able to afford an entire 35-piece orchestra and choir for the associated sessions.

‘Siren Music’, their sole release of 2020, is a curious mix of almost-Madchester danceability and 80’s synthwork, yet at all times overlain with the searingly glorious melody lines that are fast becoming their trademark. Also definitely worth mentioning is the fantastic, self-directed music video that accompanies, all uncanny-valley latex facial augmentation and nostalgia-tinged cinematography.

Sons of Raphael’s music feels almost philosophical in how considered it is, plumbing every recess of paradox and melody to create something skirting the lines of ethereal, yet somehow feeling doomed, disturbed even. It captures the historical, spiritual grandeur of organised religion, yet in the same movement tears it down in a flood of beautifully malevolent humanity. With all the signs pointing to an album at some point next year, and fortune apparently on their side, the scope for this band feels as limitless as their imagination can propel.