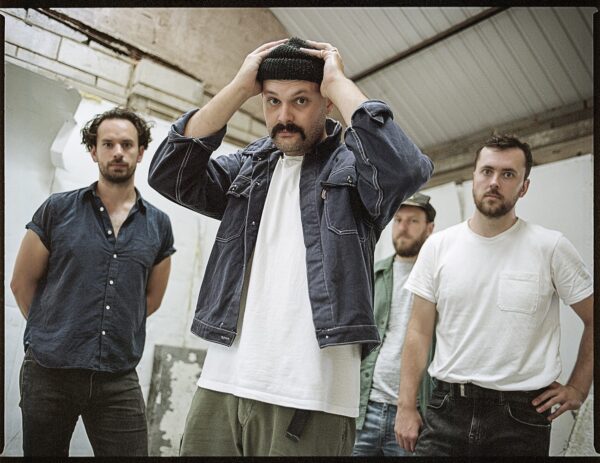 In a musical world of ever-increasing over saturation, the claustrophobic paths walked by an act are increasingly defined by the separation of wheat from the chaff, the tenderloin from the Rustlers burger, the insipidly drudging from the sparklingly magnetic. Particularly now that there are genuine titans – arena-prospect, industry salivating, chart-filling acts littering guitar music, the knock-offs multiply and multiply like O2-arena adjacent bootleg merch. You may hear 100 bands trying to do the same thing, but when one does it well it glistens, emerald-like, in a sea of obsolete sandstone mediocrity.

So then, we have London’s TV Priest – recent Sub Pop signees, adding to the fiery world of white knuckled post-punk a certain intoxicating fuel that proffers the fresh taste of the irregular at the back of scorched throat. 2020’s debut ‘House of York’ provided early insight into the quartet’s sensibilities, all tribalistic drumming, quasi-crooned vocal fury interspersed with furious guitar freakout and crashing momentum. So far, so IDLES.

Follow up ‘Runner Up’, however, is where things start to get properly interesting. Suddenly, there was a menace to their songwriting that sets the pulse beating, as frontperson Charlie Drinkwater’s vocal takes on darkly acerbic tones, pontificating at breakneck speed on the mundanity of living through globalised late stage capitalism. Still raw to the point of quasi-commonality (as was perhaps to be expected of a band with only one pre-COVID gig under their belts in their existence), the glimmers of raucous melody meshing together behind the immediate suggested a band that were worth sitting up and taking note of.

A quick waterfall of incendiary releases then followed – ‘This Island’, ‘Slideshow’ and undoubted standout ‘Decoration’. Showcasing a now trademark irreverent humour, the latter track provided a dive into the surreal mundanity of human existence. With subject matter a vignette on the dystopic normality of the world of today and tomorrow – complete with feverishly dogmatic chorus ‘it’s all just d-d-d-d-d-d-d-decoration’- it’s a head spinner around a pivot of darkly pounding rhythm section and discordant guitar stabbing. So far, now TV Priest.

Recent release ‘Press Gang’ has thus far been their crowning achievement, a three-minute screamer of a track which has seen the band shake free the constraining niggles of influence and ascend truly into their own corner of the post-punk sound. Inspired by Drinkwater’s grandfather’s life as a photojournalist and war correspondent, it considers the death of print media both as a harbinger of reliable information and staple of daily life in a digital age, as well as containing one of the dirtiest basslines you’ll ever hear on radio. The track is a killer.

As lockdown has lengthened, and British psyche darkened, TV Priest have gilded seamlessly into the very fabric of our thought process. As a band, they bring the sort of world-weary reality you’re unlikely to find interjecting pop stings in art student synth projects that are ostensibly setting the world alight. Times are fucking tough, and there is a certain cynical grit about the band that simultaneously provides empathy and motivates to get through it all, without the certain ‘conscientiousness by numbers’ that permeates the saccharine positive punk of others.  I would fist fight you in a car park were you to ever suggest that what they’re doing is groundbreaking, but from the sound of upcoming full length release ‘Uppers’, TV Priest do indeed now shimmer, like a seething gemstone in the mire.

Debut album ‘Uppers’ is out Feb 5th via Sub Pop.

Issue Twenty-Nine of So Young is out now. Its sold out in print but you can read the digital edition below.