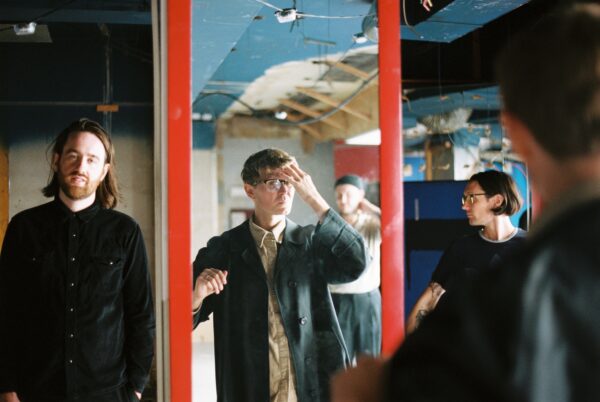 If there may be some grace in the universe, it certainly lies in fantastic music emerging from the hitherto unknown. So it was with Yard Act, the Yorkshire act who appeared in lockdown with only a couple of gigs under their belt and then continued to set the world ablaze. Critics had aneurysms with excitement, any available 7” flew off the shelves in record time, and the universe of the band (‘an imagined Yorkshire 100 years in the future’) only seems to grow with each passing day.

The product of several years of pub acquaintance, the fuse was lit finally when Ryan Needham found himself living temporarily in vocalist James Smith’s spare room, eking out a set of demos that fused Needham’s proto-punk musical stylings with Smith’s off-kilter spoken word witticisms. After some polishing, we were given the fantastically irreverent debut single ‘The Trappers Pelts’. Meshing simplistic, marching drumming with oppressive bass line and a narrative lyricism which explores the dystopian reaches of neoliberal economics through a humorously relatable grit, it was the laying of the gauntlet, a sign to the world that this was an act worth taking notice of.

Follow up ‘Fixer Upper’ truly saw the band opening up their world, and rightfully found itself on every right-thinking human’s end of year list as one of the biggest tracks of 2020. We are introduced to ‘Graeme’, the human embodiment of ‘common sense working men’s club’ thinking – a flag-waving baby boomer who’s tastelessly staunch belief in his own generation’s brilliance renders all around him inferior. Smith’s one-line witticisms, simultaneously scathing yet understanding, are ensconced again within the band’s trademark grooving minimalistic post-punk, and allows ‘Graeme’ the platform to spit his vitriol in a form which also allows for hip-movement.

Third single ‘Peanuts’ found the band delving deeper into their surreal humourism in a more explicit manner, as on the surface we are introduced to a woman who kills her imaginary husband with peanuts. With grating bass and off-kilter guitar lines scattered around a driving percussion which maintains momentum as we are pushed towards a spoken-word semi-acapella reprieve (‘It takes real guts to fake being nuts / And it takes real nuts, to break fake guts’). This isn’t to say the track is a jaunty exercise in comedy, as the band again show their true genius – the ability to take an absurdly on-the-nose example and extend it as metaphor for the darker undercurrents of the world – the key theme in ‘Peanuts’ being the way we as society are being force fed different versions of reality depending on media consumption, and its’ increasingly polarising nature. For such a structurally uncompromising song to have found such radio and critical success is a testament to where the band are at, suddenly vital lifeblood to a world which merely a year ago they were not part of.

The latest Ross Orton produced single ‘Dark Days’ sees the band again presenting the bleak and despair-provoking a signature jauntily danceable style, juxtaposing jutting rhythms and steadfast guitars with a Bombay Bicycle Club inspired chorus that is as brilliantly ridiculous as it sounds. To get their closest to a pop song whilst dealing with semi-imagined apocalyptic devolution as subject matter is no mean feat, and to make it feel like the most natural thing in the world again underscores the certain je ne sais quoi which leaks from their tracks in abundance.

As the umbrella of post-punk opens yet further, something we’re developing a cultural understanding of is those who can inject their own shot of originality into something and claim it as more the sum of it’s influences, and those whose fastidiously maintained Mark E. Smith shrine is the full extent of their idea process. Yard Act can lay claim to being the most prominent example of this, with James Smith’s ability to play with character and situation elevating them to the position of one of the country’s hottest bands. With an album now next in the offing, it appears the only way is up for these guys. Their music scratched an itch we didn’t even know we had. Maybe there is some good in the world.

Photo by James Brown. To read an interview with Yard Act you can head to the digital edition of So Young Issue Twenty-Eight here.