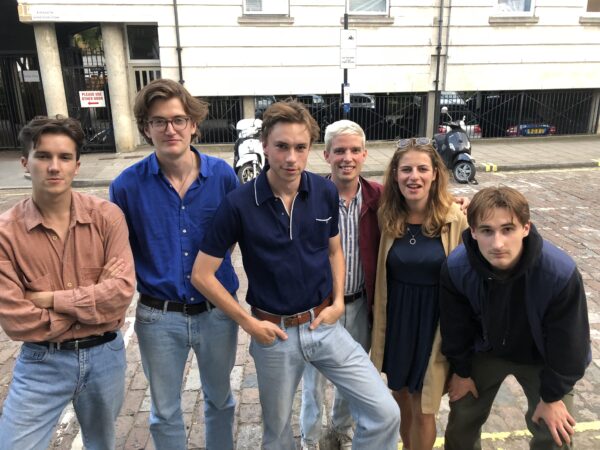 Sports Team are an ambitious bunch. The six piece from London have played solidly for the last 18 months and have become one of the UK’s most exciting live bands.

Frontman, Alex Rice and co will headline the Electric Ballroom on March 22nd (Friday), a 1500 capacity venue ready made for bands celebrating their debut album. The point of ambition lies here, there’s no album for Sports Team yet and the band have only recently played London’s, Scala. For most, this would be a daunting next step. Where are the new fans from? Who’s going to spread the word? Introducing, the Sports Team community, a Whatsapp group championing the West London band’s every move.

As a magazine, we are proud of being there from the start with Sports Team. We’ve put them on some of their first ever shows and festivals, given them their first interviews and covered their debut releases. Deservedly so, other outlets have jumped on board and Sports Team are now an indie household name. If there is such a thing? With only 2 EP’s to their name, it’s going to take a little bit more than press and late night radio play to fill out one of London’s most famous venues, plus a UK tour. Sports Team’s English-ness isn’t limited to their lyrics or social media wit, they understand the importance of community, and sometime last year they gave their fans, their community, a place to hang. Just like IDLES have with the ‘AF Gang’ on Facebook, the ‘ST Community’ (It’s admins have entertained many other names since, including current choice ‘Snake Steam Snakepit’) is an active WhatsApp group for avid followers of the band. What started as an Instagram cry from the band and possibly even a joke, has now become a wholesome place for fans to share excitement, their favourite releases, give the members nicknames (guitarist Henry Young is fondly known as ‘Pickle Boy’) and organise meet ups. We got in touch with a few members to see what the group means to them and where Sports Team fit in their worlds. 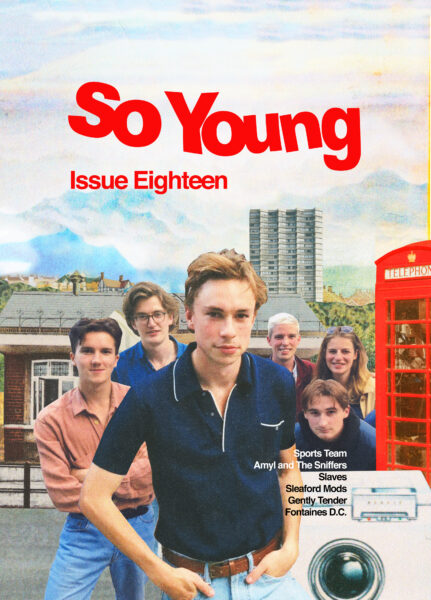 Sports Team on the cover of So Young Issue Eighteen

If you’re a member of the group, it’s hard to miss that it’s members aren’t hardened gig goers, and many couldn’t (legally) buy a pint at the Magic Gang, Pip Blom or BBC Introducing shows that they found the band at. It’s apparent that these young fans have been looking for somewhere to belong. It’s unlikely ‘Camel Crew’ has been playing down their college corridors, so where else can you go for mutual appreciation of Sports Team’s latest hit? Dillon from East Sussex thinks the ‘STC’ is where to go, “It’s the best place to get into contact with like-minded people and effectively make new friends. I’ve met people from the community at gigs and everyone is so nice and genuine.” And backed up by Edu from Barcelona who adds, “It’s about being part of something. We the people spend our whole life trying to be part of something, searching that feeling that only being involved in something like this can give you.”.

In an age of social media where there’s a case to be made that people are almost too accessible, it’s a bold move from the band to make themselves more approachable. They’ve broken the boundaries of a forum, the band are active members. No secret usernames a la Pete Doherty during the libertine dream, no membership access requests and no management admins keeping an eye. If you want to call out Alex Rice on his latest scheme or theme, he’s there with his number, ready for the taking. Maybe it’s this vulnerability combined with the opportunity for complete access to a rising band that draws people closer. It’s an idea I presented to some of the members. “…I haven’t really heard of any other bands making a group chat with their fans, or putting their phone number on their merch, or arranging a coach trip to Margate. All of these things say a lot about Sports Team, it’s as if they will always go the extra mile for their listeners and make us feel part of their journey.” Say’s Molly from Southampton. This feeling isn’t just domestic, they’ve even made a budding Australian feel like they’re a part of the gang. Paris from Brisbane explains, “When you are given the opportunity to ask direct questions and interact with artists you admire in real time, it provides a sense of personal respect and attachment to the band and its music that I wouldn’t have got otherwise. I can speak on behalf of most of the group when I say; that the band has been nothing but incredibly supportive of its members and community.”.

The Sports Team Community seem set on creating a place for mutual appreciation, new friendships and a safe place to ‘hang out’. Sports Team went into this idea as a place to build engagement between them and the fans but what they’ve also managed to do is bridge the fans themselves. Check in on the group and you’ll see exchanges between strangers about where they’ll meet during the next show and attempts to pull everyone together. The group is doing as much for it’s members as it is for the band. When your daily reading will tell you that excessive social media and screen time is poor for mental health, what positives are the ‘STC’ gaining from checking those notifications every ten minutes? It seems it’s the power of sharing that they benefit from the most. In a time where tastemakers on the radio are disappearing, especially within the world of guitar music, people are relying on each other for tips. One of the groups most active members, Niall sheds some light on how it’s helped him. “STC has massively helped me develop my music taste, exposing me to many bands I’d never have listened to otherwise. I’ve also heard about countless gigs through the group, which has brought me to a whole host of new venues across London”.

As the hype for Sports Team’s biggest headline show grows, the content of the chat is fixed on the event. What songs will they play? What they’ll do if they don’t play a particular song and where will they all meet. It’s clear that regardless of where the chat veers, it always comes back to the band. There’s a genuine love there and it’s only growing. To finish off and with that in mind, I asked the members what they hoped Sports Team would achieve in 2019. I’ve pasted all of the answers below as a sort of ‘good luck’ montage before they step foot on stage this Friday. Last few tickets here.

“Selling out Electric Ballroom would be amazing for them definitely! Maybe featuring more in my videos because I’m sure they really want to do that! They deserve to be massive (a large fan base rather than being fat), but I think we are all hoping they’ll remember STC when they’re selling out O2.” CLU

“To release a multi award-winning album and to employ me as their full-time dancer.” Dillon

“I hope that they achieve everything they set out to do in the first place, all they need to know is that they have a bunch of amazing people that love and support all that they do, I just hope that Alex Rice will always be gloriously moving on that stage!!” Grace

“I would love to see Sports Team sell out Electric Ballroom in March, I think it would be testament to the hard work and effort they’ve put into growing the band this year. I also think all of STC can’t wait for an album to be released!” Niall

“As always, they deserve the best, we know that they’re able to do what they need to do to better themselves, so the sky really is the limit for this wholesome group of people, possibly even higher.” Dylan

“I hope to see an album, I’ll be really interested to see the direction they go in.” Molly

“I’m hoping they find success with their trip to SXSW and their tour, I’ll be going to a few of the gigs and hoping to finally meet some fellow members and even Sports Team themselves in flesh. GO TEAM” Paris

A big thank you to the ‘STC’ for answering my emails and to Dylan for helping me get in touch.