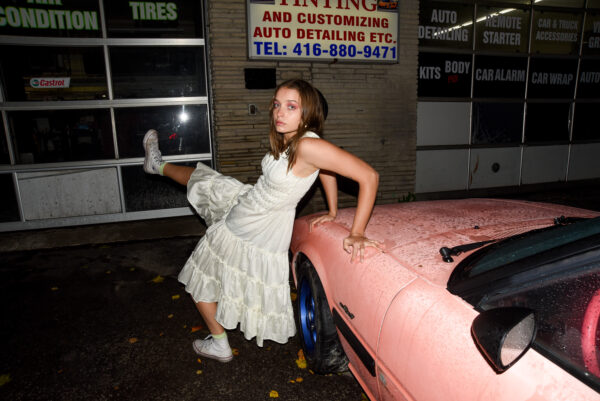 Nestled within the local music scene of Toronto sit a force to be reckoned with; PACKS – a four-piece who are reinventing the slacker soundtrack.

Initially a solo project of Madeline Link, one soon became four with the addition of Shane Hooper (drums), Noah O’Neil (bass), and Dexter Nash (lead guitar) and it wasn’t long before the quartet were putting Link’s retrospection into an Indie soundscape. Despite not journeying out of Toronto as a band to perform, early PACKS tracks still managed to filter through to the earbuds of burgeoning Brooklyn label, Fire Talk (Dehd, Deeper) who team up with Toronto label, Royal Mountain  (Alvvays, Mac Demarco) to co-release PACKS debut LP, ‘take the cake’ in May this year.

Singer-songwriter Link stands firmly at the helm of PACKS as the narrator, her soon-to-be distinctive drawl taking us through disorientating post-breakup terrain, as well as feeling generally directionless. The post-punk outfit have already cultivated a sound that takes the rough with the smooth and ‘Silvertongue’, their second album teaser, steers away from the Indie Folk inflections of debut single, ‘Hangman’ to enforce quick-fire guitars that bound off blasts of drums and complement the grungy gargle of Link’s vocals. It’s the perfect sonic segue from the first release and signals the “hurtling-through-time-and-space-at-breakneck-speed” of some of the older tracks included in the upcoming LP.

‘Silvertongue’ exudes an air of 90’s slacker rock but with a lo-fi fade, much like the wear and tear that comes with donning your favourite flannel shirt too much. If Sonic Youth’s 100% wasn’t the musical accompaniment to Jason Lee’s skateboarding sequence, ‘Silvertongue’ could’ve been.