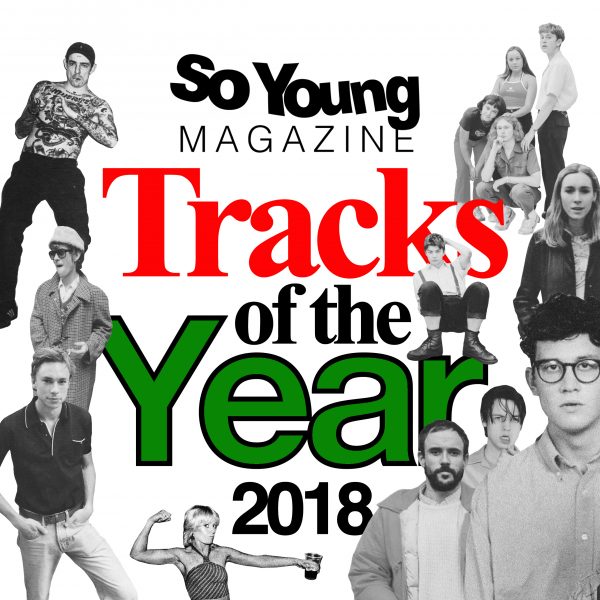 The last 12 months at So Young have included four issues of the magazine, stages at The Great Escape and Truck Festival, our very first show at the legendary 100 Club in London, our 5th Birthday in June which we celebrated with 3 nights of shows at The Five Bells and followed that with another 3 nights of shows at Birthdays, for the annual So Young Festival. It’s been a busy one, packed full of incredible new bands as well as some returning artists. To cap it all off, we sent a mass email to our writers and asked for their tracks of the year. Most of them responded so here’s the countdown.

It’s a testament to the brilliance of London’s Sorry that the hardest decision I made when compiling my ‘songs of the year’ list was which of theirs to include. Starstruck, their most recent, is vintage. It sees Vocalist Asha Lorenz again showcase the sense of quasi-neurotic intimacy which is fast becoming their signature, whilst the rest of the band coalesce in a mix of discordant bliss.  – Dan Pare

Who knew a collaboration between Saul of Fat Whites and Ben from Childhood could have been so prolific. They obviously did, as album standout I Don’t Wanna Dance rings with off-kilter keyboards and a shit-eating grin that became a summer stand-out amidst the heat and the footie. – Ross Jones

No two nonchalant drawls sound quite as sexy as Elias Ronnenfelt and Sky Ferreira’s – Iceage are renown for their bloodthirsty and beguiling creations but when they go full Phil Spector 60s pop, it’s undeniably amazing. Also, two words: them horns. – Harley Cassidy

Thrilling in its sense of grandeur and foreboding darkness, Painkiller is a stand out of many highlights from the Danish group’s fourth record ‘Beyondless’. Encompassed by the deep and emotionally dangerous love between two human beings, Painkiller is Iceage’s most bold and professing moment yet. – Ross Jones

A statement of intent. Fontaines D.C. have built quite the following over the last 12 months and it was in November that they justified the hype with ‘Too Real’. A spitting and snarling track with an intro as ferocious as its chorus, the lads from Dublin are soon to be everyone’s new favourite’s. – Sam Ford

Alex Rice stands poised over a stage, gives a sly wink and bellows “I just wanted to be your mid-noughties MTV Star”. Thus Sports Team were cemented as the most interesting guitar band to arise from Britain in years. A true exercise in wit and compelling directness. – Ross Jones

The Magic Gang’s debut was one of our most eagerly anticipated, however no amount of time could’ve prepared us for track 7, ‘Take Care’. A song that searches for a smile in the midst of heartbreak and the end of a relationship. In what could be The Magic Gang’s finest moment, I MIGHT have cried. Okay, I think i did cry, yeah.  – Sam Ford

An immediate anthem for our modern times. Idles took all of their pent up rage and their universal love for all and channelled it into a song that challenges Nationalists who feel anything other than openness and humility towards minorities and immigrants. You will not find a truer and more invaluable statement this year. – Ross Jones

On this pro-immigration anthem, IDLES managed to blend the personal and the political without compromising their punk spirit. – Alex Mistlin

Northern soul seeps out of Halifax thanks to natural born explorers, The Orielles, dismantling genres and breathing new life in to anything they approach. Bobbi’s Second World has fierce competition from everything else they released this year but I was sold by that darn good wonky disco groove. She’s a lady now! – Harley Cassidy

2. Amyl and the Sniffers – Cup Of Destiny

Unfortunately I never saw Amyl and The Sniffers play at End Of The Road – I was exhausted from too many late nights at the silent disco and decided to turn in early. I fell asleep listening to them play the secret stage in the distance and was instantly hooked on their feral 70s punk. Amy Taylor seems like such a strong force to me – her lyrics are never apologetic, going right between the eyes and aiming for destruction. I still feel, even as we enter 2019, that it’s a rare thing for women in guitar music to wear their sexuality and female identity so unashamedly. ‘Cup of Destiny’ is straight up heaviness in the best way: primal, frantic riffs punctuate Taylor’s aggressive sass. These guys prove that punk isn’t dead. – Eleanor Philpot

Stockholm’s weirdest export had a fantastic year, breaking into international consciousness in a fashion few could have predicted. The keystone of this success was undoubtedly Sports, the lead single from their Street Worms album. With lyrics of either incredible genius or mind-blowing stupidity (Baseball/ Basketball/ Weiner dog/ Short shorts/ Cigarette/ Surf board/ Ping pong/ Rugby ball/ Wiener dog/ Skiing/ Down on the beach/ Sports) over a bass-driven dystopian groove, Viagra Boys created a track which resonated with the young and broken across the world. – Dan Pare

With this brilliant send-up of toxic masculinity, Stockholm’s Viagra Boys won lots of admirers this year. Not least because they clearly have the wit to match their obvious Intensity. – Alex Mistlin