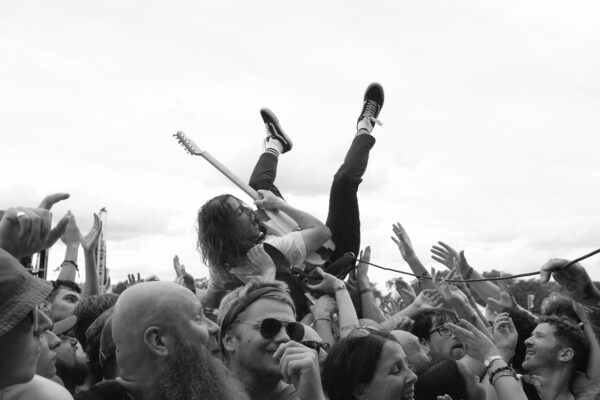 With So Young Magazine having spent six glorious years traipsing down to Oxfordshire, it felt about time I made the trip to Truck Festival. With this being my first time, numerous people sold it to me as “Reading but for kids with better taste in music”. Now without judging books by their covers, I went into the festival expecting to find 18 year olds off their bonces, NOS canisters strewn across a field and a member of Foo Fighters to be lurking somewhere uninvited. How different the experience actually was.

Truck Festival remains a staple joint in the mid-sized British festival circuit, offering rising bands the opportunity of cementing themselves as headliners while still attracting high profile names in the process. The festival itself is quaint and unassuming, with a local village air about it – the local rotary club sell Marmite on crumpets for charity, the pubs around the festival celebrate “their busiest weekend of the year” – its a charming escape from a week where gumby himself has become Prime Minister.

When your country is fucked and you are in desperate need of emotional clarity and direction, there aren’t many better to turn to than IDLES. Their early afternoon set on the main stage unsurprisingly draws one of the largest crowds of the weekend, their devout approachability a welcoming respite and immediately evoking a sense of unity within. Mark Bowen and Lee Kiernan familiarise themselves with the crowd early on, climbing across hordes of bellowing fans as Joe Talbot conducts them with his venomous snarl. It’s an absolute rush of adrenaline and shows why, no matter what time they play, Idles are one of the best live bands in the country today.

Heavy Lungs approach the sizeable So Young Magazine stage as they would any other show, by absolutely tearing it apart. They sound huge here, the size of the stage suiting their thicker, more intense sound. Danny Nedelko, topless and flailing, commands an audience without any pandering to them, while the band concoct a whirlwind of feedback that draws on their raw, primal sense of rhythm.

This years line-up catches many acts in the middle of a non-stop blur of touring and riding the wave, and Pip Blom are absolutely no exception. Their constant touring is only making them even stronger as a live band, their bountiful energy on stage is intoxicating as they gallop through ‘School’ and ‘Tired’ with unwavering animation.

Wolf Alice provide a rapturous and commanding performance that will now only see them rise further than what they’ve already reached. An early double salvo of ‘Don’t Delete The Kisses’ and ‘Beautifully Unconventional’ has the crowd screaming along every word, while ‘Yuk Foo’, ‘Fluffy’ and ‘Giant Peach’ sound built for a massive stage, Ellie Rowsell arresting even when in a quiet murmur. It’s the more atmospheric moments that really hit home, their ability to hold the crowd through those more subtle phases does not go unnoticed, putting to bed any doubts of their ability as a festival headliner.

As the Oxford Symphony Orchestra blast out sweet Beatles covers to already excitable early risers, Saturday really begins with Bristol favourites Wych Elm opening up the So Young stage. Their set is an early treat, the band channelling nerves into a passionate and potent set that has both band and crowd losing themselves in their fervent noise. Caitlin Elliman growls “help me” with hostility, the band taking their biggest show to date and ripping into it only they know how.

Haze are an absolute loose canon live, and all the better for it. They tear straight through their angsty and intelligent post punk with a cheeky wink and heady hip shaking. Bassist Ollie Ratcliffe and guitarist Conor Kearney bound about uncontrollably, while frontman Will Harrison spits into the microphone at breakneck speed. It’s their tightness as a band that’s most impressive, the texture to their songs an immediate attraction.

While Berlin bunch Gurr bring mosh pits, dancing and a hellacious cover of Nirvana’s ‘Territorial Pissings’ to the table, they provide the perfect warm up for The Murder Capital to play their best and most encompassing set to date. From the off, Gabriel Paschal Blake is riling up the crowd, while Damien Tuit and Cathal Roper draw cataclysmic noise from their guitars as if their lives depend on it. As James McGovern takes to the stage, a cigarette in one hand and percussion in the other, the set descends into absolute rapture – half an hour of unadulterated emotion and expression that merely begins and has your attention. ‘Don’t Cling To Life’ has the crowd clambering over one another, while ‘Feeling Fades’ sees McGovern join the throng, screaming along with one another in an emotional moment for band and crowd.

For anyone that would be a difficult act to follow, unless you are Sports Team. If there wasn’t already enough proof that this band will be massive, then Truck Festival cements it – their performance more of a ceremony than a performance, the absolutely massive crowd taking full control and singing along to every single word that comes from Alex Rice’s mouth. Rice is in famously fine form, pounding his chest and horse prancing in one of the most unique Newcastle United shirts we’ve possibly ever seen. ‘M5’ and ‘Kutcher’ are certified smash hits, while ‘Here It Comes Again’ is quickly becoming a staple favourite of their set, and an exciting example of where they just might head to next.

It’s been thirteen years since Foals played at Truck Festival, yet it feels like they couldn’t of come back at a better time. Returning as hometown heroes, the show is a celebration of a band and festival that have both continuously reinvented themselves without losing the sense of personality and character that made them so loved in the first place. Bedecked by a beautiful backdrop of palm trees and stunning visuals of a burning city – Yannis and co deliver a greatest hits set that shows exactly why they’ve outlasted so many of their contemporaries from a decade ago. Despite the desperate lack of sound, ‘Spanish Sahara’ and ‘Red Socks Pugie’ purr beautifully into the balmy night, ‘On The Luna’ and ‘Exits’ have Yannis and crowd punching the air ferociously and ‘Inhaler’, oh dear, sweetest ‘Inhaler’, still remains an absolute rapture of riffs and euphoria. Foals are vital.

Mr Motivator is jiving at me at midday on a Sunday. This is an icon of 90s Britain, what is life? With the man himself giving more early risers a pumped up start to a breezy Sunday, Whenyoung are absolutely in the same mood, inciting mosh pits to their sugary sweet pop. Live they are an excitable force, Aoife Power bounding about the stage in a strong white suit, sounding as riotous as she does arresting. The addition of a fourth member live really bulks out their sound – guitars springing playfully as ‘Never Let Go’ incites the whole crowd into a joyous bounce.

Where the festival market has become pretty saturated, Truck cement their place by ensuring the locality of it is a vital part, while attracting names that people will go out of their way to follow. Long may that remain.

All Photos by Cameron JL West