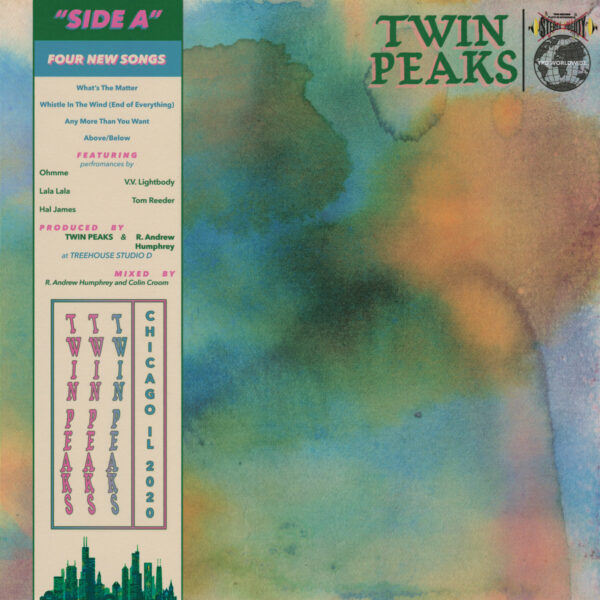 It might be tough to let go of it sometimes, but it sadly isn’t possible to stay young forever.

Sure, you can hold onto those halcyon days of old where limits to fun were boundless, but there has to come a time when maturity takes hold and you begin to yearn for days where things move much slower. It happens to the best of us, and there’s nothing wrong with that. In fact, it’s happening to Twin Peaks right now, and they take it in their stride on new EP Side A.

Having initially started out in their native Chicago as a scrappy garage-rock outfit, Twin Peaks have sonically come a long way since their beginnings – and on this new collection of four tracks they’ve ultimately shown that they’re blossoming into something that sounds more rich and fulfilling. The artistic development on show across the miniature release isn’t something that has arrived out of the blue, though – this shift towards a more refined and mature sound was prevalent on last year’s Lookout Low and could arguably be traced back to points on 2016’s Down in Heaven. However, it’s on Side A that they really grow into this new sound and allow broader influences space to flourish.

From the outset, we’re greeted with psychedelic pop that is very much indebted to the sixties on tracks like ‘What’s The Matter’, with gorgeously layered harmonies that seem somewhat atypical of the band’s prior work. On top of this, the extended track length of ‘Above/Below’ sees the band descend into the realm of explorative jams that would previously have been unthought of by the Twin Peaks of old who thrived on brevity and immediacy. If there was ever any doubt that the band could continue their gradual transformation with great conviction, this EP will surely put worries to rest.

The fact that Side A’s creation came to a sudden halt due to the pandemic also doesn’t seem to have any bearing on the outcome of the record – in times of being distant from one another, this almost feels like the sound of a band who have unearthed a bond like never before. Each member knows their role within the group and how they can use that to bring the best out of what one another are doing, giving the sense that there is a true grasp of what makes the band simply work. Along with contributions from other artists and friends such as Ohmme and Lala Lala, having finished the EP from each member’s respective homes doesn’t seem to have disrupted the creative flow that was clearly running high beforehand.

While only four songs are delivered on this EP, it seems as though its true purpose is to serve as an appetiser for what’s to come from Twin Peaks in the next chapter of the group. If the maturity on show is what’s to be expected from their future releases, this trajectory will be an exciting one to focus on.