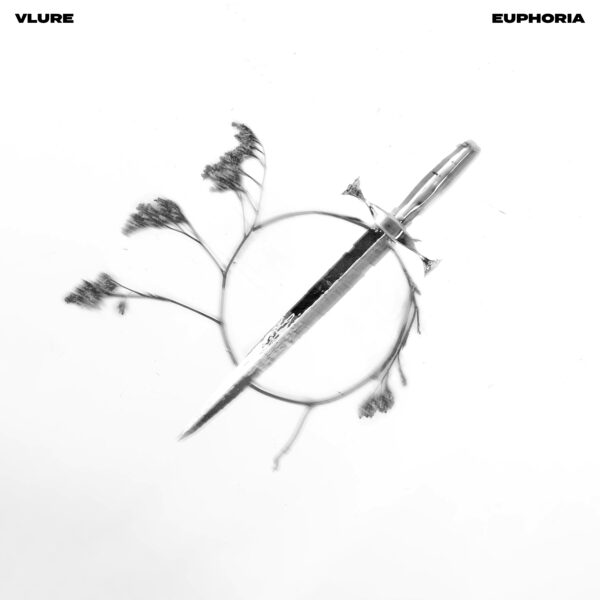 A three-act goth-rave melodrama steeped in the club-culture of its native Glasgow, VLURE’s debut EP, ‘Euphoria’, births a pummelling and emotionally-riven overload indeed.

A clutch of colossal hitters obliterate senses in the first act: ‘Show Me How To Live Again”; the ecstasy of ‘Heartbeat’ steaming hot on its heels. Brittle synths, ice-black and bloody, hewn from urban matter, rear up like new-romantic skyscrapers; warehouse-razing rhythms devastate the quick of your heart. You can smell the sweat spooling from the PA, feel the dancefloor’s burning desires resound with every struck note; reverberate with each hollowed-out disco snare.

When the music strikes an electrifying apogee, it’s like an evening peaking: you know, that time when the frenzy of empathic chemicals reveals life’s essences to us hardy ravers, conjuring those intangible visions of profound and fleeting truths that suggest solution to the mystery of existence itself! “Give me a release!!” howls Hamish Hutcheson on the adrenaline-pump of ‘Heartbeat’, pithily vocalising the fire; wielder of a baleful, proudly-glaswegian holler – enraged and tormented, frail yet empowered – Hutcheson compellingly haunts ‘Euphoria’s wrenching grooves throughout

Time to take it down. Act two, a couple of quote-unquote ‘slowies’, megalithic and destructive nonetheless. ‘The Storm’, soaked in dour, rain-swept triple time – are these raindrops or are they tears?? – Hutcheson caught in said storm’s malevolent eye, bawling – “what is life but a storm!?” as cymbals crash around him in apocalyptic furore – the agony of death, the crumbling of civilization all imbued in this titanic tragedy. And ‘I Won’t Run (from Love), betraying again the moralistic tenderness which weaves so ambiguously with the out-and-out aggression of this EP: that potent dichotomy residing at the core of VLURE.

Finally, the last act. The titular ‘Euphoria’ –  as plaintive piano drifts like fog, the bittersweet mantra of the Raging Weekender is divulged: “Monday morning / when we wake / we fall and we hate. / But Friday night ‘/ I’ll be alright  / although I might die”. The life-and-death stakes  bluntly cemented in this closing Disintegration-esque epic , thus concludes this tale of the most horrifically glorious weekend of your life.

‘Euphoria’ is out now on So Young Records. Pre Order your copy on 12″ Frosted Clear Vinyl here.