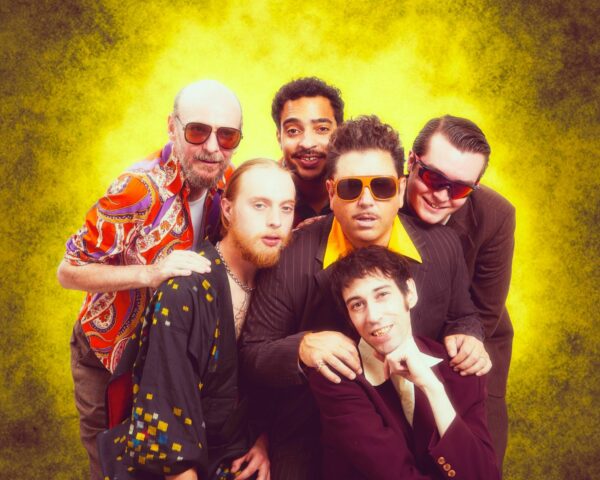 Junk rockers Warmduscher have announced their upcoming album ‘At The Hotspot’ with a slick new single, ‘Fatso’.

A fuzzy swaggering bassline trails throughout the track alongside 70’s overdriven guitar and phasing synthesizers. With airtight production courtesy of Hot Chip’s Joe Goddard and Al Doyle, the band have created a much cleaner sound. It’s a far cry from the frenetic ‘Big Wilma’ of ‘Whale City’, or even the unflinchingly punchy ‘Tainted Lunch’. The sentiment is in the same ballpark, but the packaging is full throttle doom-disco.

‘Fatso’ is drenched in 80s sleaze-funk. While stripped of the attacking Warmduscher tenacity, it still retains a degree of rogueishness. It doesn’t at all signal a loss of the band’s previous incarnations. Wonky synths make polite interjections between the misanthropic pronouncements of Clams Baker Jr: ‘Fatso’s got Viagra and Peruvian gold, no time to waste. 8 hours to go until I’m at my desk, so let the good times roll’ Clams grovels. The message is pretty simple – fearless hedonism. Enjoy the sights, sounds and feelings – the consequences are a long way down the road.

The melody and hooks stick with you. There’s something addictive about most Warmduscher songs and this is no exception. It signals a clear statement of intent from the band: good pop is their game and they’ve got it down to a T.

While ‘At the Hotspot’ is still very much a Warmduscher album, with all its cracks and crevices oozing garage rock bravado, the production values buff out those jagged edges in a way only Joe Goddard and Al Doyle could have pulled off. The band add: “We’re just really psyched to play this whole thing live now,” states Clams matter-of-factly. “And it’s a whole revamp—new label, new producers, new logo—new everything.”

The band also head out on the road in spring of this year on a run of UK and European dates, including some already sold out rearranged shows and their biggest London show to date at The Forum. Tickets available HERE.