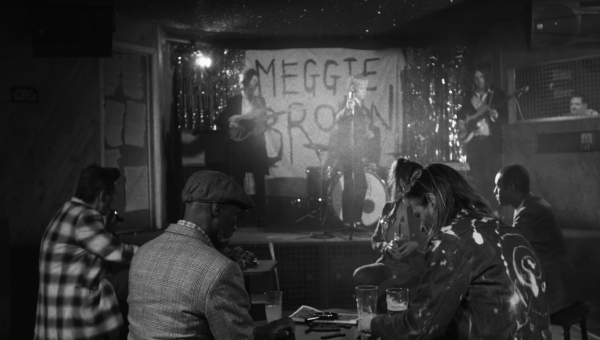 Meggie Brown’s new tune is a stunner. Spawned from the annals of a windowless North London living/rehearsal space, it is an ode to the surreal places waning mental health can take you – and through Brown’s direct address to the listener, almost an ode of encouragement, a reminder that everyone is more or less in the same boat.

The track does indeed contain a certain transient quality evocative of mental illness and the feeling of an inability to quite pin down a fixed point around which to start anew. This is showcased expressly through the dogmatic-repetitive pleading in lines such as ‘You’ll have to cross that bridge/ They’ll push you off that bridge’, but also the manner in which the track moves from simplistic start to crescendo.

10 out of 6 is Brown’s debut physical release, with the 7” coming out via Hate Hate Hate in mid-October, produced by Alex Kapranos [Franz Ferdinand] and Edwyn Collins (thus providing a de facto seal of approval from two of UK indies’ few remaining tastemakers). Kapranos also cameos in the video for the track, taking on the role of surly bartender in the classic ‘fags and cheap lager vs. the surreal’ monochrome visual.

With a string of solid support roles (Bodega and Franz Ferdinand, to name a couple) in tandem with her own markedly intense, self-curated basement shows, Meggie Brown continues to supersede the accepted fashion in which to generate a legitimate buzz around an act- and is on her way to cementing her place as one of the capital’s most impressive prospects.