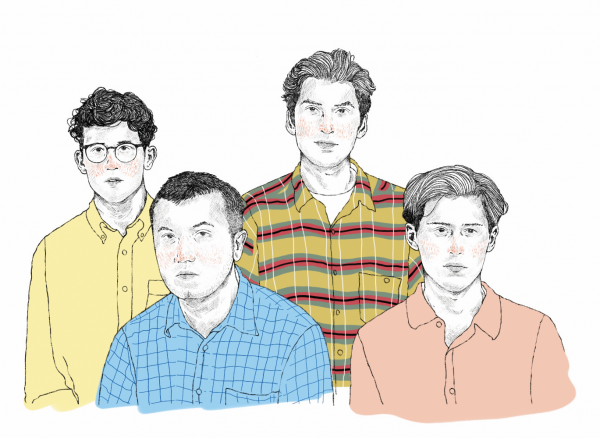 The Magic Gang have the capacity to become one of the greatest pop acts around. The Brighton four piece released their self titled debut this year, an album which displayed their ability to create bounce around, never leave your brain, pop melodies as well as songs where they reach inside and pick out the deep bits for tear invoking slow stories. Today we meet somewhere in between as Jack, Kristian, Paeris and Gus release an illustrated video for ‘All That I Want Is You’, a song centred around the life of one of their idols, Brian Wilson. The track addresses the Beach Boys legend directly, reflecting upon some of the weird and wonderful chapters in his life.

Singer, Jack Kaye told us a little more about the track “We wrote this song about Brian Wilson, one of our favourite artists and someone we really admire. I’d just read his autobiography when we were working on this and I was touched by the stories he recounts- some interesting, some really sad. We based each verse on something from that book, some fascinating or strange incident which took place during his time in The Beach Boys”

Watch the brilliant video below which features illustration of Brian Wilson in plentiful styles from throughout the decades as well as some Karaoke style lyrics for you all to join in at home.