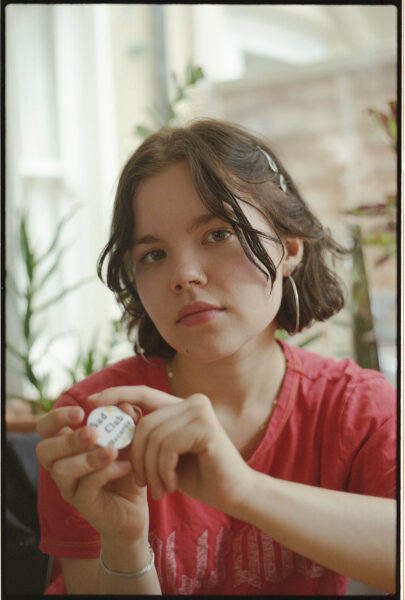 Way back when, we had a chat with the folks at Rough Trade Records and their one piece of advice for someone looking to create a label was “Don’t do it to try and make money”. A damning statement but what followed meant more “…Only release music and artists you truly believe in”. This leads us straight to Tallulah Webb who heads up cassette label, Sad Club Records.

Since finishing school and taking up a job at Rough Trade, London, Tallulah set up her label to remedy the boredom of the scene around her and to champion new music. Sad Club Records has released limited edition compilation tapes as well as EP’s from the likes of L.A. Peach and John Myrtle. Eager to find out what’s next, we sent over a few questions via email to catch up.

How are you? What have you been up to recently in the world of Sad Club?

Hey! Pretty well thanks. I’m actually currently making a temporary tattoo page… they’re being given out at the Sad Club x So Young gig. I’ve been working on loads of releases, I put out John Myrtle’s ‘Here’s John Myrtle’ EP and L.A. Peach’s ‘Come On Over and Test Me’ EP. That was pretty sick. They’re both fucking great. Prepping for a compilation for cassette store day, and working on a zine.

Can you talk us through the beginnings of Sad Club Records?

I started it in May 2016, I had just finished school and spent a while working at Rough Trade. I guess it was the mix of always wanting to start a label but not thinking it was possible because of the cost of vinyl, how bored I was with the scene at the time, and seeing more and more people buying cassettes at rough trade which made me believe that it was possible. I actually started it in about 2 weeks which is ridiculous, its the logo which took the longest to do. I knew what kind of music I wanted to release, and I’m a really hard worker when I want to be, so It just took off. I knew absolutely nothing about running a label at the time, which was understandable but incredibly naive and dumb of me. Everything just caught on really fast, except for press, thats pretty tiring and hard.

What led you towards cassettes, and physical releases in general?

I wouldn’t ever do a just digital label. To me, that’s just like doing all the admin without getting any rewards. But, I work in a record shop, I’m going to be very biased. ‘Don’t judge a book by its cover’ is total bollocks! That’s what its there for! Most of my favourite albums, I have found from seeing them in a shop and thinking ‘ooooh baby that looks good, I’m gonna listen to that’. I’ve had so many lovely messages off people saying they’ve found Sad CLub cassettes that way, and then become a massive fan!

With cassette over vinyl, obviously a lot of it is that I wouldn’t be able to release vinyl without funding, but its so much more than that. It allows you to take a chance on the release and have a lot more creative freedom. Think about R. Stevie Moore’s cassette club etc. It allows way less rules, and really takes away the stress of vinyl too. It also gives smaller artists the chance of actually making money off a release. The sound is still great and it forces you to sit down and listen to it all the way through, cherish it. They’re so convenient for selling at gigs too. 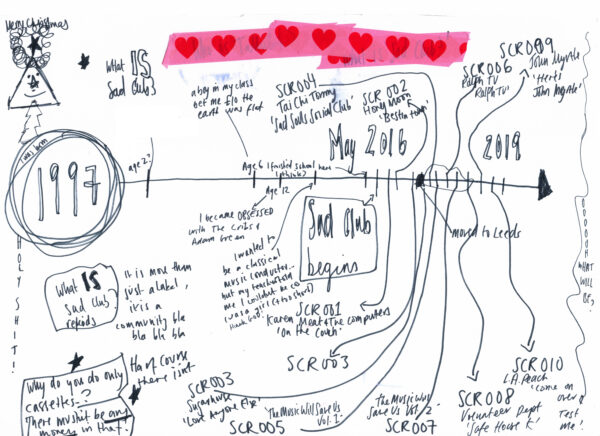 You’re on a bit of a roll at the moment with releases, what have you been most excited about?

Both L.A. Peach and John Myrtle were sick releases. I’m doing a compilation next month, and I’m so excited about that. There’s about 14 tracks on there and they’re all exclusive. Its my best one yet!

Do you have a proudest moment so far?

Proudest? I’m not sure. I’ve had a really weird moments though. Like being on ITV news, BBC news and Radio 1 all in one day was pretty mad. I get really shaky hands when im nervous so I was really scared of spilling a cup of water live on TV and becoming a worldwide freak meme or something. I didn’t. I went to the pub that evening and thought back to the freak of a day and I was pretty proud. Also, seeing so many people at John Myrtle’s London show made me pretty proud… of him. I guess part of that is me?

Whats the biggest lesson you’ve learned during your time with Sad Club Records?

I’ve learnt so much these past 3 and a bit years. Probably the biggest lesson is to be okay with the fact that not everyone is going to like it. From the beginning, there have been so many people who say ‘eugh, cassettes, what the hell’ ‘the hiss…’ and all that. Some people will hate it. Some will love it. I met someone who hates cookie dough ice cream the other day. Doesn’t mean its a bad flavour. Stopping to worry about what other people think is so freeing. And even better, let it challenge you to work harder! 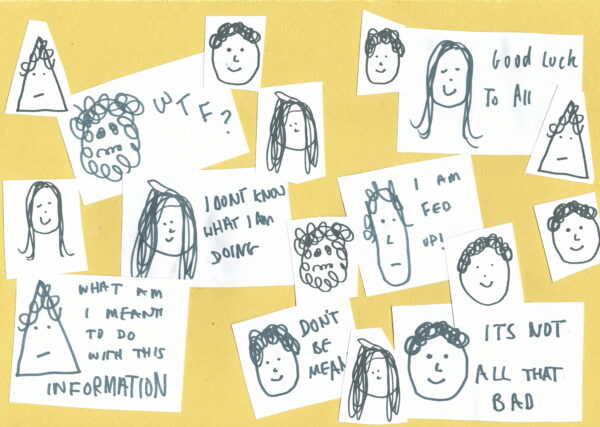 What’s the ambition/ end goal with Sad Club, would you like to venture into the world of vinyl?

I don’t know. I’ve never really thought about this. I guess maybe if you asked me 3 years ago, I would’ve said something like, ‘to still be going’ and ‘to be a bit more’ everything. That’s just what I want. I want it to carry on going and expand. I want to be able to give and do more for the artists I’m representing. Gonna hang around supermarkets looking for the next Mason Ramsay to make it happen. Maybe if we had google reviews and they were all bangin’ then that would be well nice.

And nah, I don’t see a cassette-only label as worse than a label that does vinyl. Thats just the vibe I’m going for, and I don’t want it to change. I don’t want to make people sign contracts and get really serious. Nah.

We are joining forces to put on a showcase of Sad Club Records. What can people expect?

(if you want this answered seriously – 3 of the best bands in the world, L.A. Peach, John Myrtle, and BUGS, some fantastic DJs, a brilliant array of merchandise (inc. temporary tattoos), and very lovely people.)

You can get your tickets for the show here. Full details below.