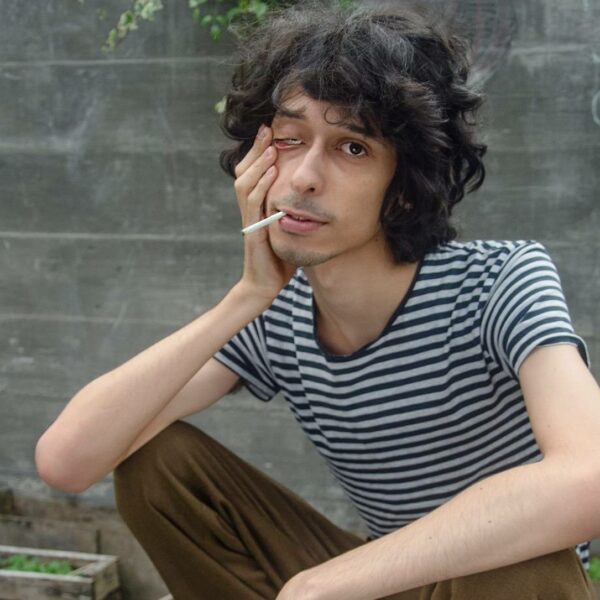 Spain-born, London-based Alien Tango chats to Lorenzo Ottone about his love for Japanese video game soundtracks, the challenges of making music from his bedroom and his trademark 15 seconds Tik-Tok songs that just made it into a compilation.

How would you describe your new EP?

‘Friends!’, like the title says, is about friendship. When I moved to London, I came over with my former bass player. We’re still best friends and we spent hours travelling on planes, on the underground, and couch surfing for months. Over those times I made loads of friends. That was the reality I lived when writing the songs. It’s a sort of ode to bromance this EP.

Your music is a captivating pastiche of styles and atmospheres. How do you approach the creative process?

I think I make complex music, but I don’t play well. I am getting better now though, I play all the instruments, but when I started I’d use little effects to make up for it.

I used to make progressive rock, a genre where the people playing it are usually really good with instruments. It was a bit arrogant from me to do it. I was more of a progressive wannabe, really! I was listening to loads of Yes, Bowie, MGMT, Flaming Lips and all that neo-psychedelia.

In your latest EP there’s a Bowie-esque vibe going on, though.

I definitely am a Bowie fan, so that doesn’t surprise me. However, most songs have a crooner vibe. The vocals were thought like an expressive Sinatra.

Your video for single ‘Heavenly’ catapults you into an imagery made of 1970s discos, karaoke rooms and Japanese references. How did it come together?

Everything I like isn’t really relate to music, but it translates to music. The video was inspired by a perfume ad I saw on TV, but I can’t remember the brand. I tried to replicate that atmosphere. I am a big fan of Japanese computer game music, so I came up with a fictional intro in the style of Japanese films. I made up all the words to try to sound Japanese. I hope it worked. When I was recording the EP I took a leap into loads of Japanese music like Haruomi Hosono and videogame soundtracks.

Is the heavy use of karaoke sounds a consequence of your passion for Eastern music?

It all started when I used to play in a band whose members were mostly based in Spain, so I had to travel all the time to gig. When I’d play in London, not having all the members with me, I had to start recording sets I could play along to on stage. That’s kind of how Alien Tango was born. Until then I had always written music keeping a band in mind. When I started playing karaoke sets in London I shaped the way I was making music, using more drum machines.

Does this DIY, solo attitude label Alien Tango as bedroom pop? Do you feel like you belong to that scene?

Yes and no. I guess I tick all the boxes to be considered bedroom pop. If we consider where I record my music, it’s all done in my bedroom, so yes. However, I don’t believe I belong to any particular place. I am in-between scenes. People could say I’m lo-fi, bedroom pop, psych or something else.

Is the easy access to recording facilities that made bedroom pop so popular a resource or a drag when it comes to stand out among a multitude of similar artists?

I am aware that more artists means more competence, but for me the more music the better. I’m the first who wouldn’t be doing music if it wasn’t for this approach. I started making music when I understood I could do it in my room. It wouldn’t be easy for me if I had to book a studio and find session musicians.

Is this the ethos that brought you to record 15 seconds Tik Tok numbers, which just came out in the compilation ‘Blink Pop, Vol.1′?

I think I started making music for fun and over the years I’ve been putting loads of pressure on what I do. Tik Tok videos have been a way to change that because I can put together ideas that wouldn’t usually make it on an album or EP. This way, I can do 15 seconds songs that pop up on the Internet, giving me loads of freedom. I used to do one per day. Tik Tok songs don’t give you time to be too fussy. I record one and I upload the video straight away. They don’t give you the time to spend three hours changing a chord. I think these songs helped me to feel challenged and creative again. Since I started trying to make a living out of music, I’d find myself very distressed, spending my nights on a song. Sometimes I wouldn’t be proud of myself. Tik Tok videos changed that.

The Spanish indie scene is doing well at the moment, both home and abroad. Why did you decide to move to England to pursue your music career?

Spain is having a sort of boom in the indie scene and there’s loads of interest from festivals, radios and TV for indie music. However, I think I wouldn’t really fit. I don’t think there’s potentially interest in what I’m making. To make it there I feel like I would limit myself and sing in Spanish to fit within what’s popular. Most of the artists sing about everyday life things. In England there’s many more bands I connect with.

What are you aiming at, then, with your music?

When living abroad consciousness and unconsciousness often overlap, as it’s like to simultaneously live parallel lives in your old country and in the current one. Does your surreal writing style come from this?

I guess so. My previous EP, ‘Isla Bonita’, was written when I just arrived in London and was inspired by the feeling of being away from home. Now I see all the news about my country through social media, it’s not that I don’t care about it, but I feel distant. I’m at home in London now. I feel like I’m from nowhere.