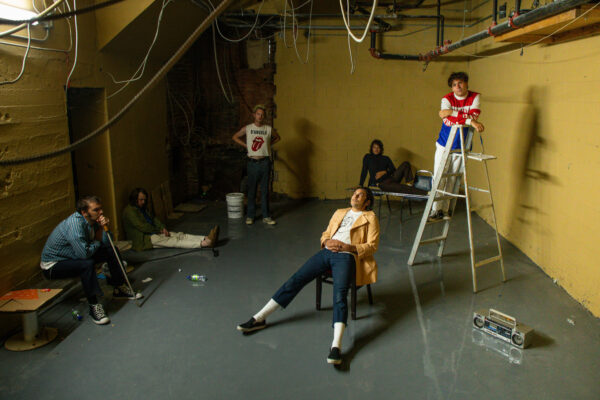 Like the headstrong scorch from a thrift-inherited medallion laid exposed and charmed between the skin and unbutton of its wearer, California’s The Growlers are a blazoned emblem for the curiously captured.

Edging their way into your soul’s, soul, until there’s nothing you wanna’ do more than get up on the greenest of plush velvet settees and have a total freak-out, we spoke with frontman Brooks Nielsen ahead of a sold-out stint at Manchester’s Albert Hall.

BN: We really fell into this thing, growing up I didn’t have an admiration for bands or rock-stars… I was very content. Didn’t have ambitions to go travelling, I never thought I’d be doing this- still kinda feel the same way. I don’t picture where I’m gonna be in five years, or if there’s any certain thing I can do where I think ‘if I do that I’ve made it’. It’s kinda a day by day thing that I enjoy, it feels legit.

I want it to be natural- that’s how it was in the beginning, I just wanted to party, throw parties. I was always the leader in whatever friend group I was in and ‘band’ was just another step.

“oh really, you wanna start a band? Alright but if we’re doing it, we’re gonna do it properly.”

I didn’t want any outside influence or opinion, didn’t want people to tell us we couldn’t do it, that it was stupid to try. There was too many bands… we kinda just got away from everybody and hid in the city, tried to make music in the house but it’s really difficult. Landlords… we were in a very sketchy area of the city and it was hard to be loud and weird there without sticking out too much. Our house got shot at twice by drive-by’s… “okay let’s get ‘outta here”- tried another house, had problems with the landlord.

My dad had a business and we had a warehouse. It was great, no fucking neighbours, nobody around, all hours are open to party and be creative. We built our own little world in there and I got really used to that. It became the guideline for how this band really worked and even when we did want help, want to be recognised- that not working out… in some way this is how it works. We put our heads down, only deal with ourselves and you know, we have more control of everything we do.

The last record was the same as how it always is, we cut ourselves off, put the work in, met up, collaborated- put up with each other and somehow it pulled off again. It’s very cruisy, very casual.

People are very quick to try and understand things…

I get that, they wanna talk about it, categorise it, say what the genre is and how it started- try and make sense of it all. The reality in music is I don’t know where the hell any of it comes from, you really are just trying to knock down walls inside of you- try to push through and try and make the most sense of it afterwards by re-living what happened. It’s a much more magical experience that you can’t put words to.

I think that’s why we were at war with ourselves for so long. We weren’t allowing ourselves to be paid for what we’re doing… it felt wrong. I didn’t want to de-legitimise how real the lifestyle was that we were living but after a while, the hard work and all the time and energy being put into it, it feels good that we’ve stuck around for so long.

What was the reasoning behind ‘An Evening With: The Growlers’?

We kinda saw that these two shows (Roundhouse, London and Albert Hall, Manchester) were big and it was like “let’s give them a taste of the big shows we do at home”. Skipping the support, using the extra time to play really long sets. It’s refreshing to be around other bands now we’ve been doing it for so long but at the same time, in some way the cities are appreciating it and people are coming. We can’t go back, it would be weird now to play for an hour.

You don’t know you can do it until you do it. It’s asking a lot of people, physically and then there’s the other side… the fear of going on stage and balancing that with alcohol or drugs. We’re getting older too, I’m beginning to pull back a little bit. You hear about some bands coming back after like, 20 years. That would be terrifying- you change routines when you get back home.

I shut off, I’m still creatively thinking and doing some things for the mind- I’m reading Murakami ‘1Q84’ but asides that… drinking scotch, I’m a family man- all these wonderful things that are strange at first, I’m like “yeah, I’m gonna do that, I’m gonna do gardening what’s going on!”

This is what it is. I don’t truly understand how this world works, It’s ever changing. I don’t know how to add it all up but I’m grateful for it.