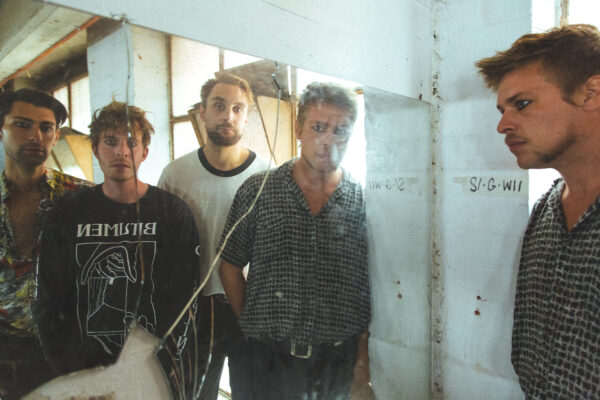 Somewhere between the full length interviews in our print mag, you’ll find a section called ‘Who Are You?’. It’s our place to introduce brand new bands who we feel should be on your radar. They’re currently playing tiny rooms but we don’t think that’ll be the case for long. Who Are You? has been home to the likes of Shame, Sports Team, Sorry, IDLES, Fontaines D.C. and many more before they’ve hit our covers. Whilst the print edition only has room for a few questions, we like to post the full interview online alongside their latest releases for you to dig in to.

In Issue Twenty we sent over the basics to Australia’s A.Swayze & the Ghosts who have just released their debut EP via Rough Trade Records.

I’m Andrew Swayze, front man and sporadic guitarist of the rollicking Australian punk band A. Swayze and the Ghosts.We make music from tangible instruments, and play them with our own hands too! It comes out abrasive, energetic and always slightly on the verge of all falling apart, but it’s real and we fucking love it.

Myself and The Ghosts hail from the island state of Tasmania, it’s where the English displaced their convicts in the early to mid 19th century and due to the often grim weather here, old locals make the joke: “The Brits must have chosen It because it reminded them of home”. Which isn’t really a very good joke after a few hundred times, or even at all.

Tasmania is a picturesque but slow moving place that is slightly detached from the rest of Australia both physically and socially – we were bored and isolated as kids. Boredom is a beautiful thing. Isolation is a beautiful thing. Both are undervalued but essential part of creative progression – they give people the chance to converse with their thoughts which are often distracted by ease or competition. The art scene here is huge and you can find absolute integrity in how people portray their ideas – I attribute a hell of a lot of our band’s artistic attitude to the place we grew up, it’s a wild place.

Zac (drums) found me at a cafe we worked at by the waterfront of Hobart. I probably looked like shit when he first saw me due to my lifestyle back then. I found our guitarist Hendrik sitting on a vertical bar outside our graphic design class during one of the first weeks of college. We didn’t talk. He was a shy guy and I was boisterous – I think he was scared. I don’t remember finding Ben (bass). Perhaps it was at one of his gigs the night before Zac found me at work looking like shit? 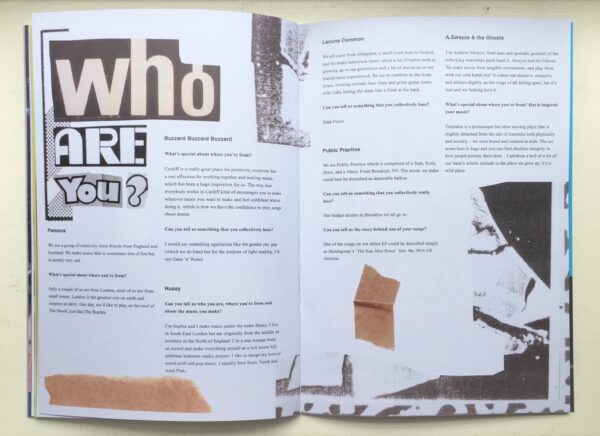 Who Are You? In Issue Twenty

I wanted to start a band of my own after both groups I played guitar in split up within a month of each other. I lived with Zac and Hendrik and had written a few songs in my bedroom in our shitty share house. We still play some of those songs today. I coerced the two of them to start a three piece that I would front and we rehearsed in Zac’s few times and then went out and started gigging. It became apparent pretty quickly that we would be far better off writing as a collective as I can be a lazy prick and enjoy intoxication a bit too much. We gained a bit of a reputation for being quite a wild live band and played heaps. Six months had passed and we saved some money and went in to track a record locally. We asked Ben to play some synth over a couple of tracks, though the album was a drug-fuelled mess and we threw it out (but kept Ben). After that episode is when we really became serious about this band and we’ve been slogging it out ever since both in the studio and across Australia.

Hendrik, Zac and myself REALLY love KFC Zinger burgers, we aim to eat one in every major country by 2023.

Benny hasn’t the ability to love.

I don’t think you’d have enough page for a list that long.

We had a practice space in Ben’s basement for a year or so that we’d be writing in every couple of days. One night we’d penned this incredibly long song called Reciprocation. Hendrik started playing this cyclical riff that we were all drawn to while we were outside having a smoke. It was a matter of the other two jamming along while I ad-libbed over the top about the woes of a relationship I’d been in a little while before. The song was complete within about three quarters of an hour, and we’d taken to tracking it. Funnily we were interrupted at one point by the maniac from the flat upstairs smashing beer bottles on the “studio” door in attempt to make a stand against our supposed racket, we threw em back and he ceased. It was fast and balanced on the tip of a needle but that recording is the same one that you listen to now and we love its conviction.

We’ve just finished tracking our debut full length record and it’s going to be fire. We worked with a phenomenal Australian producer named Dean Tuza. The guy understands our direction perfectly and held forth our integrity to make a record that is the perfect reflection of our attitude and opinions, and we are all proud and elated to release it. Otherwise we’re spending most of the year playing shows, including our first trip to the UK this May/June as a part of The Great Escape festival. Bring on the Zingers, Britain.