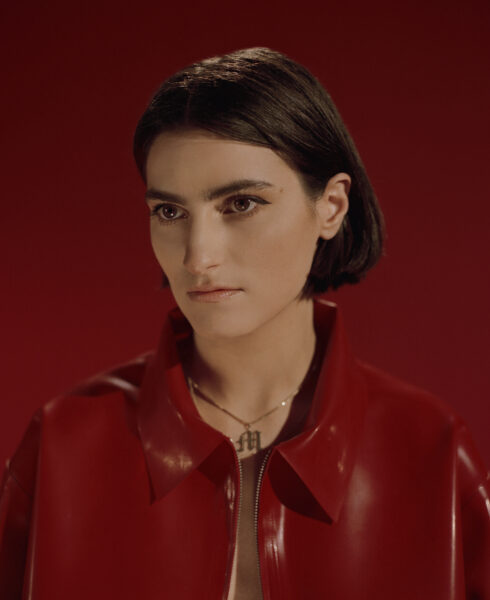 Featuring vocals as warm as a bottle of bourbon, Mattiel’s music has enchanted many, from bluegrass obsessives and guitar kids alike to Burger Records and Jack White himself.

Her new album Satis Factory, due to drop next week (June 14th), is impassioned Americana at its best, combining high- drama blues with the story-telling prowess of country. We chatted with the Georgia native, just before she embarked on the second leg of her U.S tour, about her rural beginnings and growing in confidence as a writer.

So Mattiel, you’re currently on tour in the U.S, how is that going?

I’m enjoying it very much, just the idea of being able to get out and see your own country…like when I was in Washington, D.C I went to this Smithsonian and tried to see a few museums there. I’m so excited to get out West too as there’s so much more to look at, on the East Coast it’s all kinda green and brown and flat and the only pretty parts are kinda up in Appalachia…but when you go out west everything is just so foreign and different and strange with all the rock formations and mountains and deserts.

To take us back to the very beginning, I heard that you grew up on a farm in rural Georgia, that must have been quite inspiring, to have time to create as a kid…

My Mum had me when she was like 42, so I had older parents growing up but I didn’t realise it ’til later that that’s a really cool thing to have…they had a lot of life experience by the time I was small child so I learned a lot from them. I didn’t have any siblings and I had a lot of space to be in my own head and develop my own sense of identity and my mum encouraged that especially, but it’s different for all people, some people take on different qualities from being out in the middle of nowhere, but isolation can definitely have its benefits.

So how old were you when you first fell in love with music?

My parents didn’t have music playing all the time in the house…like a lot of my friends constantly say, “my mum always had this record playing or there was always music in the house during breakfast or at all times”. But for me it was more of a sporadic thing…there would be music and arts fairs where my mum would take her watercolour paintings, which were very good, now that I’m old enough to compare them to other things. She would also take them to bluegrass festivals and bring me with her, so I would end up seeing live music but in like middle Georgia which was often country or bluegrass, so my first exposure to music was probably country radio stations or live bluegrass music. I think when you’re really little and you learn a language, you don’t remember learning that you just absorb it, and in the same way that I absorbed the english language without really realising it, I absorbed rock ’n’ roll and country and americana because that’s what was around me and that was a part of the culture of where I lived.

So what came first for you, was it drawing or music?

I always loved the arts. When I was ten I wouldn’t have been able to tell you if I wanted to do music or artwork or fashion design or photojournalism – I was interested in all of those things at the same time and I don’t think I’ve chosen one yet, I just happen to be in a situation where people are really supporting the music that I make, but it’s also not one hundred per cent influenced by other people’s reaction that would be silly.

I read that as a kid you didn’t believe it was possible that you could make music. Why was that?

As a kid I took french horn lessons and I took guitar for a couple of years, I think maybe I always thought it was too far away or too far fetched for me to try and become a musician because my parents weren’t musicians and neither of my parents were musically talented. My dad could sing but he didn’t sing very often, he would just like sing around the house for fun to to make a joke but he had perfect pitch.

My mother was always making things with her hands – always painting or making set props for movies and that was just the closest thing to me at all times, so I think naturally that’s what I picked up first. 3-D design was what I studied in college and then I ended up at a tech company and I was doing really fulfilling work for them. So I just picked up visual art and design first, it was the medium I was most confident in. Singing and musicianship, especially singing is just a more vulnerable medium than visual art work. You can separate yourself from things you put on a canvas, you can walk away from it, but when you’re singing it’s really visceral and human and scary.

So when did you start to take music more seriously? Was it when you were in college and met Randy and Jonah?

I started to feel more confident when they told me that they really liked what I was doing, which was kind of a surprise, I didn’t know what to expect and I was very nervous about singing in front of anybody at the time. I don’t think I became truly confident until I had the approval of some of the people in the industry like Third Man, Jack White, James Endeacott in London and Jeff and Danny at Heavenly, I think this has given me a whole new perspective on what this can all be about.

That must have been pretty insane, as the White Stripes were some of the first songs you ever learned on guitar, to then have Jack White praise your songs…

It was like a dream come true, it was like going to the moon, it was something that I never thought was possible! It was such a great gift because I got to tour with him and watch him perform and it was like getting a masterclass in performing arts.

So after all that went down after the first record, and it came to write the new album, would you say you arrived at the process with a new found level of confidence, or was there still a lot of doubt there?

I get self doubt all the time, and I don’t think that’s ever going to stop… but there’s a new level of confidence for sure, like I can even hear in my own voice on the new record that I sound more confident and that gives an interesting context to the first record if I’m thinking objectively, like I can see how the progression from the first to the second record could be pretty cool to watch. I think fear of failure is what will kill me in the end though – not actual failure but the fear itself. It’s a funny mental game that you always have to play with doubt…

I don’t think perfect things are beautiful, so no… but it’s my own standards, or inner feeling, I guess, that I know I can do better. Even though everyone else is like “you’re doing great, it’s amazing”, inside I know for a fact that there’s so much more in there and I want to pull it out and present it in the way that I want to… it’s an ongoing challenge.

On the new album there’s lots of literary references, including greek mythology, do you see yourself as a storyteller?

I had a really great AP literature class in high school and a great teacher that taught us how to analyse poetry and find sources from the library. I think I learned a lot from analysing poetry and

analysing Hamlet – doing like a six page paper on Hamlet. I got a better idea of how the writer was working and how the writer constructed their work. That class was better than anything I encountered in college, so that’s what I draw back to.

What is the significance of the album title, ‘Satis Factory’?

Well Satis in latin translates to enough/adequate or sufficient and the duality of those two words are two exposing ideas that signify this never ending search for gratification. I wrote the words for these songs during the time at my reliable day job which was fulfilling for a time but ultimately wasn’t the answer to my creative urges. The Satis Factory itself is a perpetual manufacturer of work, it’s like a symbol of always aiming at top notch results but only finding temporary satisfaction at the end of each creative season. For example, in music or plumbing or fine art or cattle ranching, the creative mind is the constant search for the reward or the end result which is kind of a conundrum because once we’re satisfied with one thing we’re never fulfilled enough to stop producing work, hence the factory which never stops and whose gears are always going. So we continue on to something and we’re always searching for more.

It’s kinda a broad idea but it’s something I’ve learned through the process of making things. When it comes to finding happiness in what you do, it’s never the end result, you only get temporary satisfaction from that. It’s not the album that’s gonna make you happy or the business venture, it’s the actual time you spend doing it. Which seems like such an easy thing to understand but the world doesn’t operate in that way.

You also make your own music videos. Do you feel like your visual art and your music are always feeding into each other in this constant cycle of creativity?

Yeah, I have just as much fun making the music videos as I do the music. I feel like the songs and the album are something else entirely and they should live in their own world though, like I’m not thinking about the videos at all when I’m making music.

I like to have a quick deadline to meet as I’ve become really good at – probably from procrastinating a lot at college – pulling things out of my ass, working with recourses that are readily available and just seeing how far I can take those things, it’s a fun and interesting challenge that I’ve always enjoyed. So for example when we need a music video in like three weeks, I’ll be like, “that’s insane”, immediately start shopping for props. Sometimes the props will steer the ship for what the video is going to be like, or it’ll be a one off idea I have in the shower and the whole video takes on this new unexpected life. I think a lot of great artists work in the opposite way, where it’s not off the cuff and its very planned and meticulous but I haven’t mastered that yet.

I really enjoy communicating on a mass scale, I think that’s a really cool thing to be able to do in this modern age, to be able to put your work out there and get it published, as you’re able to reach a lot of people, meet new new people and have conversations with them. I’ve already seen the beginnings of it with our tour last year, playing and selling out clubs where everyone is singing the words back to me…It never occurred to me that that could be possible.