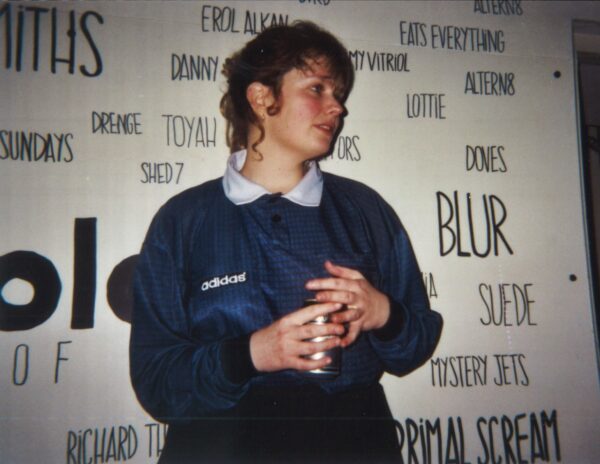 Growing up in a Dutch family running a pioneering music blog, Amsterdam-based Pip Blom had a revelatory experience when her mum took her to see Parquet Courts some six years ago.

Pip, inspired by the band’s energetic but sophisticated guitar licks, decided to self-teach the instrument and started penning songs. Three years on from her first attempts on a three-string Loog guitar, Pip’s debut album Boat is set for release in May on Heavenly Recordings.

Lorenzo Ottone speaks to Pip Blom about building a solid foreign fanbase, the likely troubles of touring after Brexit and the genesis of the album.

It’s been about a year since your acclaimed string of shows at The Great Escape and you have gone from a bunch of singles to an album. How have these months been?

We had already decided to record an album in the summer, so we booked a studio. Unfortunately our bass player left, so we had to find a replacement and re-work the song for him with the studio already booked. We started rehearsing in July and August, it was all a bit impromptu. In September we finally recorded it. I would say this has been the only hectic moment. I really enjoyed the last year.

Has moving from an EP to an LP been a natural process? Did it give you chances to work on slower numbers like Bedhead?

Definitely. At the beginning I didn’t want to make an album, because I thought people weren’t waiting for it. However, after three years of writing I came to the conclusion that with an album you have more options and can bring in more diversity. Not that I ever write a song with the idea of making a single out of it, but I really enjoyed making other stuff; especially more different from the usual style.

You come from the Netherlands, but you are signed to a British label and have a strong fanbase in the UK. Do you feel part of the current British indie scene or do you still feel like an outsider?

We’ve now made quite a few friends in the UK. We hang out with Sports Team, Haze, The Orielles, I think that really helps. We still feel as outsiders, but not that much now. I think the language barrier makes it a bit difficult, especially with conversations.

Does it come natural to you to write English lyrics?

Yes, because the Dutch language is not very sexy. However, it is getting more and more popular with young Dutch songwriters.

Do you think Brexit could affect your touring?

It will definitely affect us. Even if things are not very clear at the moment, it looks like we’ll have to get visas and that will cost us money and time when travelling in and out of the UK. I’m also quite curious to see how many British bands will still be able to play in Europe. I hope it won’t affect them too much.

You started playing with a three-string guitar, right?

Yes! My dad is into Kickstarter projects, so he financed and bought one of these guitars Loog makes. It is a three-string guitar thought to teach kids, because with tiny hands it is impossible to wrap them around a big neck. It took a while to master the six-string one, though [laughs].

Has touring foreign countries and playing in front of many different crowds helped you overcome your shy attitude?

I’m still very shy. I think it is different on stage because you enter a ritual. When on stage I actually try to make eye contact, but I’ll always be a bit shy. Oh well, it is fine [laughs].

After all this touring, do you still see Pip Blom as a solo project or as a band?

Definitely as a band. The idea was to have a band anyway, but at first I couldn’t find anyone to play with, so I started by making things by myself and using my name which stayed with time. My brother then reluctantly joined. He never really wanted to be in my band, but now he’s really enjoying himself [laughs].

Your album cover artwork reminds me of Hockney paintings. Where did the inspiration for it come from?

I’ve always been into flats, industrial and brutalist architecture. Me and my friend Susanna were working on the idea, so I sent her loads of flat pictures and she came up with the artwork. In the end I added a palm tree, because I feel the album has got a spring/summer vibe. I think a palm tree really fits it.

Catch Pip Blom live in the UK at the dates below