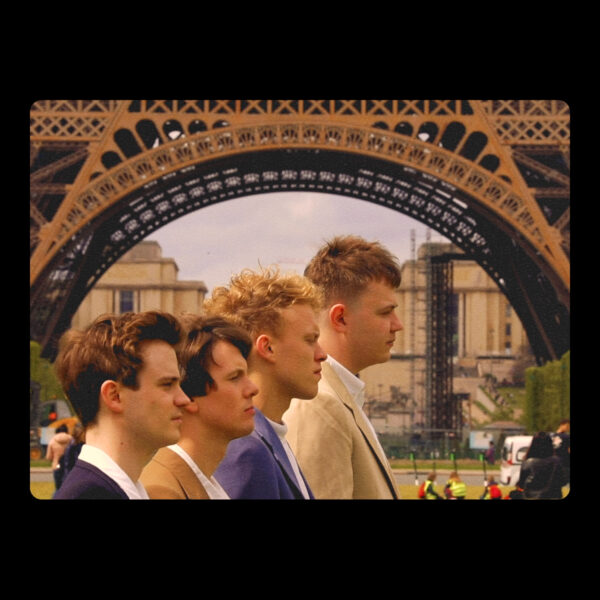 Following the release of their new music video for ‘Anything You Want’, We catch up with Weird Milk, Director Cameron JL West and D.O.P Charlie Pryor to discuss their recent adventures in Paris…

How did you guys end up working together?

Cameron: I met Zach and Charlie of Weird Milk at a Cribs show back in 2015 and we’ve been working together since then. We were both at very fledging stages of our careers at that point so it’s been so sick to grow together. I’ve designed them various single artworks, logos, posters and I
animated the video for last years single ‘Better’, but I definitely feel like this new video for ‘Anything You Want’ is our best collaborative work to date; our Arc De Triomphe you could say haha.

Charlie P: Me and Cameron had gone to Uni together too (Arts University Bournemouth) and worked together on stuff in the past, so it was nice to link back up, see all the hard work come together.

What was the idea behind the video?

Zach: Our plan was to simply have this day out in Paris, stopping at a few landmarks and trying to capture this jolly day out on film.
Cameron: Yeah, This is the bands first music video that actually has them in it so I wanted it to capture what they’re really like. Watching the video is meant to feel like you’re hanging out with the band on a summer holiday, getting to know their characters, seeing the sights… having a laugh, I like to think we got that.

Joe ‘Blue’: We chose Paris due to it being the City of Love, and as a band full of hopeless romantics it just seemed to make sense.
Cameron: We were trying to see how far we could stretch the budget, spending it on travelling to a sick location, rather than studios and lighting. We got the Eurostar at 5 in the morning, spent the whole day filming and walking around Paris, then came back later that evening…
Alex: I did 29,000 steps that day…I think that could be a personal record. That’s impressive right?
Charlie P: Had a really nice lunch out too, the wine was beaut!

Any complications/trouble from the locals?

Zach: Naturally, 4 boys in suits in front of a camera did turn a few heads which I guess is to be expected haha…
Alex: Oh! We were stopped in front of the Assemblée Nationale building by two soldiers carrying machine guns… Was pretty scary but luckily Charlie (Pryor, Director of Photography) could speak French and explain what we were doing and diffuse things.

What were your inspirations for the video?

Cameron: I’m a big fan of Richard Ayoade’s directorial work (Submarine 2010, Garth Marenghi’s Darkplace 2004, Vlad the Impaler – Kasabian 2009) . His use of crash zooms and whip pans to an often comic extent is something I’ve always really loved and tried to emulate in this video. I think Weird Milk have quite a retro sound, so we were mirroring this with the outfits, the grainy film treatment and the colour palette. Charlie (Pryor) has a great eye for composition too so we got some really lovely and balanced shots. We wanted it to feel touristy and naive, yet kinda effortlessly aesthetically pleasing at the same time. I worked very closely with director Edward Zorab too, both before and after the shooting. He’s a good friend of mine and he’s taught me a lot, was glad he could be a part of this vid.

What’s the song about?

Zach: The aim was to create a song of upbeat pop structure that sounded expansive and punchy in terms of production. With the verse lyrics matching this feel with the idea of being able to have anything you want, juxtaposed with a repeating chorus of being at home and sleeping all
weekend, these two notions act almost as a conversation of call and response.

‘Anything You Want’ is out now! Catch Weird Milk at Battersea Arts Centre for Close Encounters Club with Trudy and the Romance (6th June) and then at Truck Festival later this Summer!