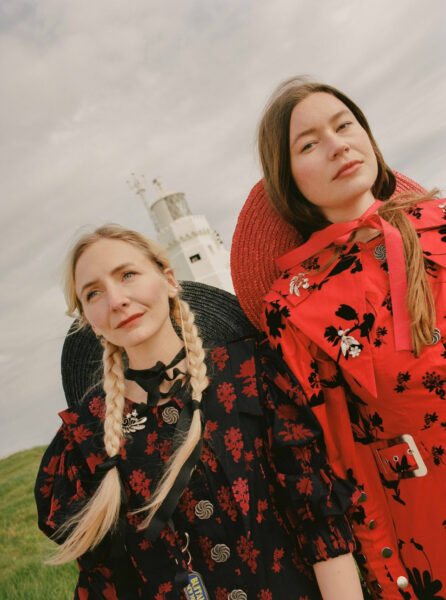 Isle Of White trailblazers, Wet Leg, return with ‘Too Late Now’ and announce news of their debut album, ‘Wet Leg’; due for release on April 8th via Domino Records.

Having already set the tone of their game-change with previous singles ‘Wet Dream’ and ‘Chaise Lounge’, in ‘Too Late Now’ Wet Leg have mustered up the mindset to slow down. An introspective delve into the miraculous re-invention of self, found in the perfumed bubbles of a ceramic-tub filled with hot water. ‘Too Late Now’ is an effervescently indulgent trip down familial lane; a mind, body and fully-robed soak into the unassumingly deep pools of life, creativity, and Wet Leg.

Not ones to shy away from three-minute bursts of absurdist-leniency, the irresistibly awkward pairing of lead-innovator’s Rhian Teasdale and Hester Chambers, is a joyously unassuming gift in itself.

Racing through chorus’s like a stop-motion tale of coming-of-age idiosyncrasy- one in which the world unfurls in hyper-reality as its protagonists turn to bubbles to push through the frenzy, ‘Too Late Now’ is too lyrically agitated to be a straight-laced ballad, yet not rhythmically senseless enough to be anything other than catchy-as-fuck.

We may only be at the beginning of Wet Leg’s domination but the scope of their impact is that of which dreams are made of.

The new issue of So Young is out now Ft. Parquet Courts, Matt Maltese, Honeyglaze, Gustaf and more. Buy your copy here, or read the digital edition below.