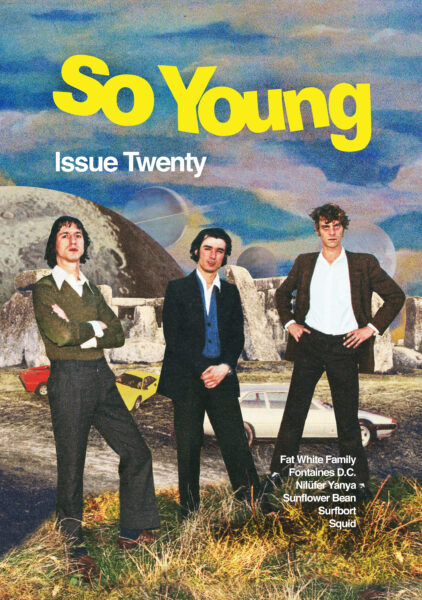 Our first magazine of 2019 is a landmark for us. So Young started as a bedroom project and nearly six years on, we are remarkably releasing our twentieth issue. Thanks for sticking with us.

Issue Twenty welcomes Fat White Family back to the cover, as one of the most important bands of the last few years return with their third album, ‘Serfs Up!’. Lias, Nathan and Alex speak honestly to us about the new sounds as well as the darker times that they overcame. Our online cover features Dublin’s Fonatines D.C. The band have played every city and festival in the last 12 months and we gave them a call whilst they were on the road in Europe to talk about their debut album which is out in April. Beneath the covers you’ll find chats with Nilüfer Yanya, The Murder Capital, Squid, Sunflower Bean, Surfbort, Working Mens Club, Soft Opening, Deptford Norther Soul Club, The Pistonhead Foundation, NOV3L, Talk Show and more.

To those that don’t know, So Young is available in print as well as for FREE online. In this feature, we wanted to walk you through what you can find inside and give you a glimpse into the magazine within its primary and intended form, print. Shop here. 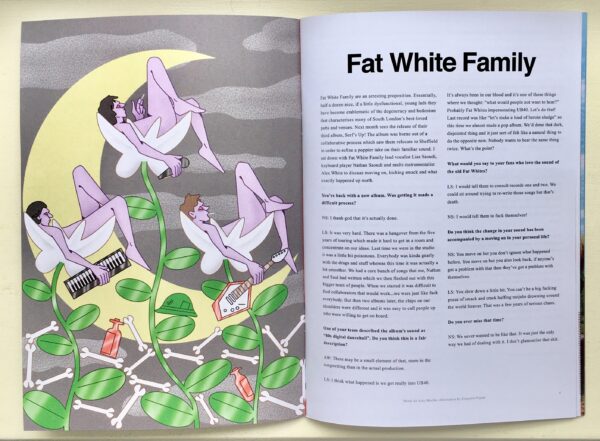 Were you ever worried that you wouldn’t be here now with this record, that Fat Whites were going to go off the rails?

Lias Saoudi: I was of course. Saul was out the band for a while and that’s a pretty key given that until that point he’d written pretty much all the music. And it was definitely a massive anxiety working out how we were going to replace that. But everybody else bucked up. Alex White came on board, Nathan started writing his own songs and so we developed a little pile of material and then Saul came back anyway. 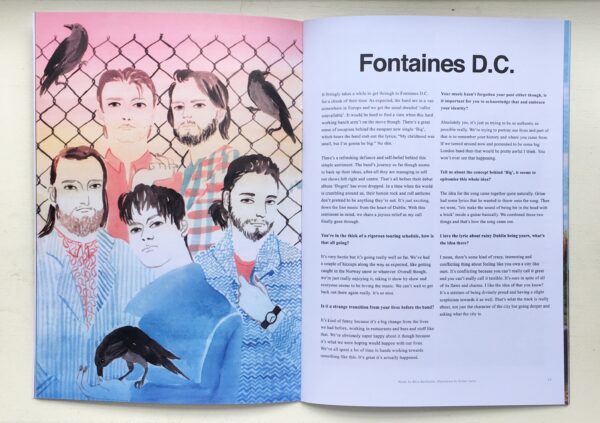 Tell us about the concept behind ‘Big’, it seems to epitomise this whole idea?

The idea for the song came together quite naturally. Grian had some lyrics that he wanted to throw onto the song. Then we went, ‘let’s make the sound of being hit in the head with a brick’ inside a guitar basically. We combined those two things and that’s how the song came out. 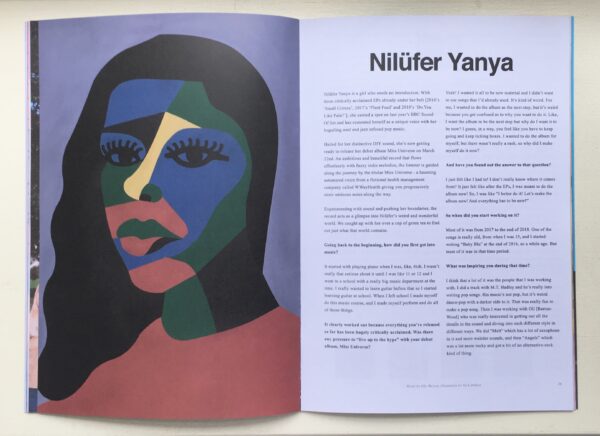 I was just trying to be less precious about the production. I’ve never been a producer myself and it’s always been the point of “Oh, this person’s going to ruin the song!” This time I was like “Right, there is no song yet. We’re going to write it and whatever it sounds like it’s going to sound like.” I was just trying to let loose a bit more with it. 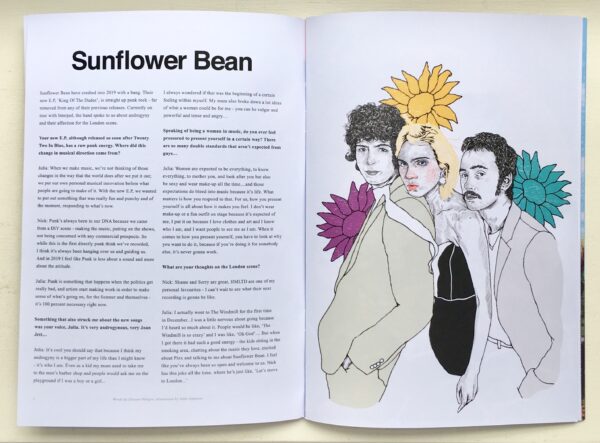 Speaking of being a woman in music, do you ever feel pressured to present yourself in a certain way? There are so many double standards that aren’t expected from guys…

Julia: Women are expected to be everything, to know everything, to mother you, and look after you but also be sexy and wear make-up all the time….and those expectations do bleed into music because it’s life. What matters is how you respond to that. For us, how you present yourself is all about how it makes you feel. I don’t wear make-up or a fun outfit on stage because it’s expected of me, I put it on because I love clothes and art and I know who I am, and I want people to see me as I am. When it comes to how you present yourself, you have to look at why you want to do it, because if you’re doing it for somebody else, it’s never gonna work. 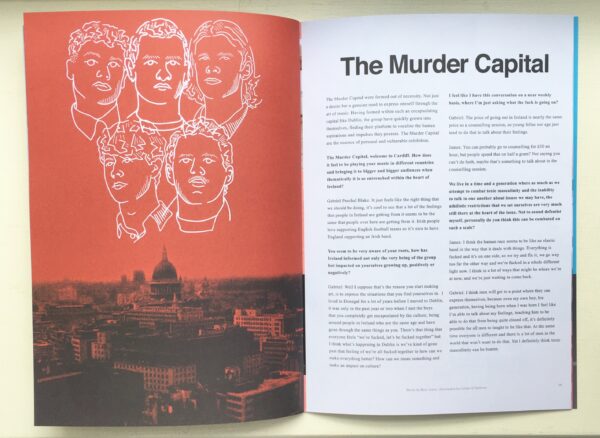 You seem to be very aware of your roots, how has Ireland informed not only the very being of the group but impacted on yourselves growing up, positively or negatively?

Gabriel: Well I suppose that’s the reason you start making art, is to express the situations that you find yourselves in.  I lived in Donegal for a lot of years before I moved to Dublin, it was only in the past year or two when I met the boys that you completely get encapsulated by the culture, being around people in Ireland who are the same age and have gone through the same things as you. 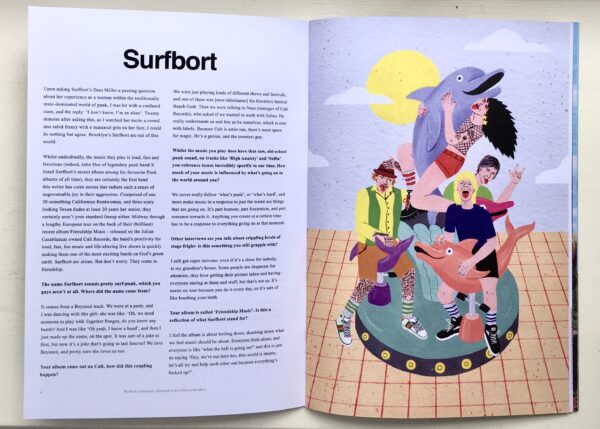 Your album is called ‘Friendship Music’. Is this a reflection of what Surfbort stand for?

I feel the album is about boiling down, dumbing down what we feel music should be about. Everyone feels alone, and everyone is like “what the hell is going on?” and this is just us saying “Hey, we’re out here too, this world is insane, let’s all try and help each other out because everything’s fucked up!”. 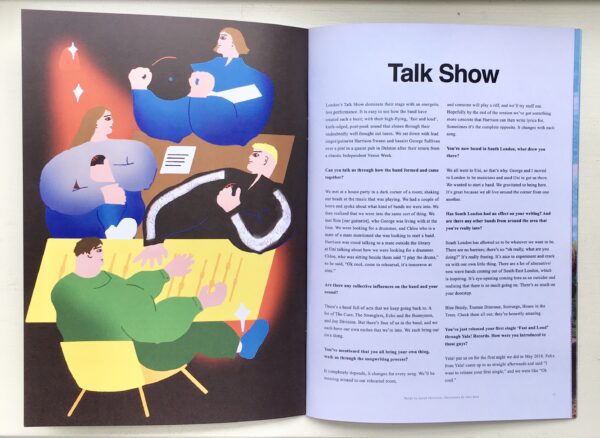 You’ve just released your first single ‘Fast and Loud’ through Yala! Records. How were you introduced to those guys?

Yala! put us on for the first night we did in May 2018. Felix from Yala! came up to us straight afterward and said “I want to release your first single,” and we were like “Ok cool.” 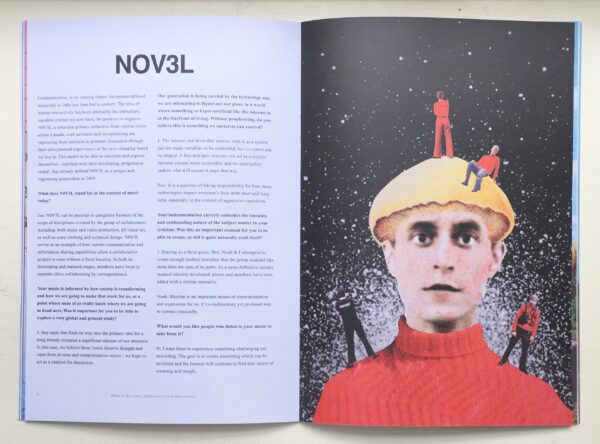 What does N0V3L stand for in the context of music today?

Jon: N0V3L can be peculiar to categorise because of the scope of disciplines covered by the group of
collaborators including: both music and video production, all visual art, as well as some clothing and technical design. N0V3L serves as an example of how current communication and information sharing capabilities allow a collaborative project to exist without a fixed location. In both its developing and matured stages, members have lived in separate cities, collaborating by correspondence. 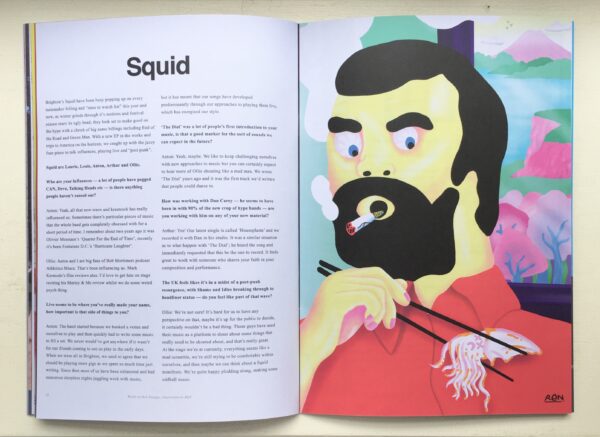 ‘The Dial’ was a lot of people’s first introduction to your music, is that a good marker for the sort of sounds we can expect in the future?

Anton: Yeah, maybe. We like to keep challenging ourselves with new approaches to music but you can certainly expect to hear more of Ollie shouting like a mad man. We wrote the Dial years ago and it was the first track we’d written that people could dance to. 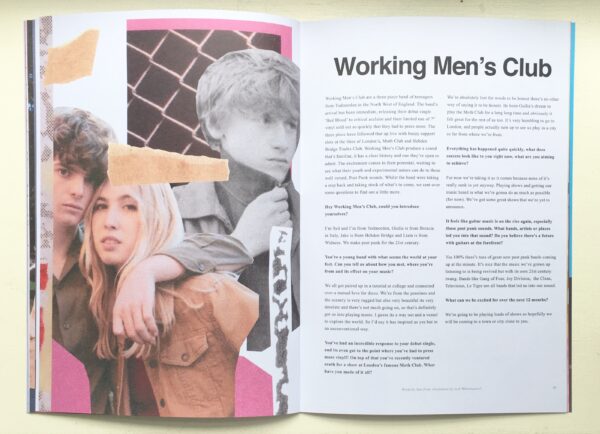 Everything has happened quite quickly, what does success look like to you right now, what are you aiming to achieve?

For now we’re taking it as it comes none of it’s really sunk in yet anyway. Playing shows and getting our music heard is what we’re gonna do as much as possible (for now). We’ve got some great shows that we’re yet to announce.

There’s more to see inside Issue Twenty including the full interviews with the above bands and artists, chats with Soft Opening, Deptford Northern Soul Club and The Pistonhead Foundation. As well as our introductory feature ‘Who Are You?’,You’ll also find an introduction to London’s Black Country, New Road. Purchase your copy here.