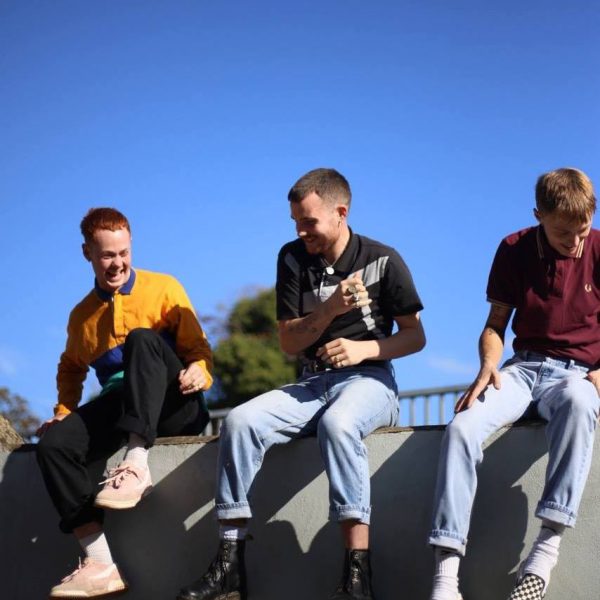 Within the pages of our print and online magazine lies a section of great importance. Titled ‘Who Are You?’, we stick our ear to the ground and introduce you to the sounds that are making people whisper up and down the country. Hopefully, some time in the near future, they’ll become the regulars on your Radio Stations, Spotify lists and gig listings! The section only allows for a couple of questions to be printed, so today we bring you the full introduction to one of our favourite new artists. In Issue Seventeen we sent over the basics to Lady Bird. Find the key details below.

Can you tell us who you are, where you’re from and about the music you make.

We are Sam, Joe and Alex, from regal Tunbridge Wells and we make something like punk music.

If you’re into it then being from a small town is special cos everyone’s a crank, everyone knows it, and by the time you’ve grown up everyone’s embraced it. In Tunbridge Wells there’s a good creative scene that it’s easy to feel a part of, and that’s really important for staying true to your desires and creating what you want to create. Got to hand it to our local independent venue, The Forum, for giving a home to that. Symbols are important, and I don’t know a better one than a converted Edwardian public toilet sitting on the common overlooking the busiest roundabout in town, holding down the mantra of disgusting Tunbridge Wells since 1993. I’d say it’s inspired our music. It’s what we know.

We grew up around each other but not with each other. Sam got us together properly. There was a moment in time where we’d all been living away from TWells and happened to come home. We all had our reasons. Sam knew he wanted to start a band and says now he always had us two in mind, from having seen us play when we were younger. I remember being in not a great place in myself and there being a Slaves show on at The Assembly Halls in Tunbridge Wells on a weekend I was visiting home. I’d come across Sam on a train platform a couple weeks earlier and really got on. He embraced me like an old mate at the doors to The Assembly Hall and told me he wanted to play together and that he’d spoken to Alex. I’d already been considering it so said I’d sack off living abroad right then and move back to get this band going. Our first rehearsal was the next time we met, and the first time we’d all three of us been in a room together with no-one else around.

What led you to form a band? A particular happening or a mutual love for a record or sound?

A Grand Don’t Come For Free definitely was a big influence. The way the story resolves with a really deep revelation, but could just as easily be taken as face value commentary or just top tunes. For me making music has always been about doing something I love doing with my time. It’s a bonus that playing gigs gets you about the country meeting new people. Sam dreamed this band up though so I want to credit his desire to create value for anyone who wants to listen and especially to inspire youth. But yeah once we’d been together for a few months it felt like we’d never not been. Probably sounds pretty normal from the outside, but I think there was something deeper pulling us together.

Can you tell us something that you collectively really hate?

Can you tell us the story behind one of your songs

Leave Me Alone is set from the perspective of being locked in a bathroom at a party with your mate gurning your ear off. For me it’s really about choosing the right voices to listen to.

We’ve added ‘Reprisal’ to our new Spotify playlist ‘The So Young List’ which you can find here.